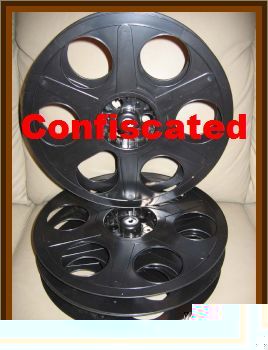 After the instrumented package was dropped form the balloon, the pilot circled the area until the package was picked up on the ground. Then the pilot requested permission to land at Ellsworth AFB to refuel and return to his base in Minnesota. This was the typical procedure at the end of each balloon tracking event. However, this time the pilot was ordered to land at another airport. The pilot checked his air navigation map and discovered that the airport was shown to be closed. The pilot replied that the airport was closed. He was again instructed to land there. On the final approach to the closed airport, the pilot noted abandoned hangers with no one on the ground. Once he landed on the runway, jeeps with personnel in them came out of the abandoned hangers and blocked his aircraft in front and in black. He was interviewed in his aircraft. His camera was taken and the film removed. His camera was given back to him, without the film. He was told that if he ever mentioned this to anyone, he would lose his contract, and more.

Apparently, it was several years before he told a couple of his friends who were at the local airport, sitting in the lobby waiting out a blizzard. They were "hanger flying". The airport was empty, except for the four of us. I was a teenager who worked at the airport and was sweeping the lobby floor. For whatever reason, the pilot suddenly looked around, and then in a very hushed tone, began to describe the UFO event. Although there was no one else around, he talked in almost a whispered tone, and kept looking around to make sure no one else was listening. He told everyone not to mention this to anyone else.

The pilot was the Manager of the our local airport, in addition to his aircraft charter service. he was also the Executive Pilot for a large company in town which had an Aero Commander as their company plane,

After viewing MUFON's "Hanger One" series, that discussed an incident near Ellsworth AFB, which caused me to contact people. There is another second hand account of a UFO landing on a golf course, about 1963 - 1964, which a friend who worked at the golf course at night watering the golf course greens, told me of his experience.