Ride To The Concert 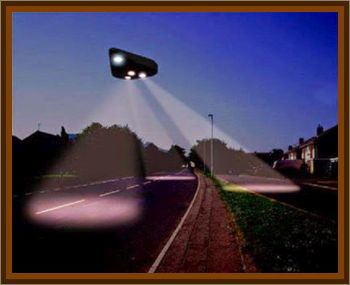 It was a warm, late November, 1974, right before Thanksgiving, and I was home on leave from the Air Force. Five months pregnant with my first son, I was just beginning to show. Some friends, two brothers and a sister with whom I had been as close as siblings for years, had a surprise for me, 3rd row tickets at a Paul Simon concert!

They came and picked me up in their family car, a big old sturdy American sedan. As it was warm and humid that night, none of us wore jackets, and we rode with the windows down. Our subdivision was probably 15 miles from the main highway. We had to drive down Steubner Rd through dense woods with no street lamps the whole way from my house, About two thirds of the way to the highway, it suddenly became blindingly bright in a large circle around us, much brighter than police helicopters. And there was no noise & not a sound to be heard. The car died as if the key had been turned off, the car stopped dead in its tracks. The bright light focused on us for what seemed like hours. We were very, very cold. The car wouldn't start, the radio and lights were dead. It was as if the electrical system was fried.

In whispers, we all decided to lean out the open windows and take a look-see. It was a large trapezoidal craft with yellowish-orange running lights going down all four enormous sides. It seemed to hover over us forever, but was actually about 10 minutes when, without making a sound, it went straight up at an inestimable rate of speed until it was just another twinkling star.

It was then warm and humid again, and the car started right up. We drove straight to the nearest bar and all had a shot of brandy to calm our nerves, then on into town.

Since then, and until this telling, none of us has spoken of it. But the youngest brother protests the existence of UFOs loudly and to anyone who'll listen.