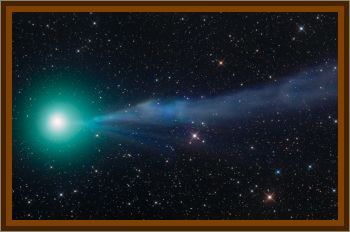 An astronomer named Swift noticed a point of light, the magnitude of Venus, out over the Pacific Ocean. The point of light was approximately one degree from the setting sun as twilight fell over San Francisco.

The following afternoon Professor Perrins, working at the Lick Observatory atop the 4,000' high Mt. Hamilton due east of San Jose, CA, received a telegram from Swift announcing the possible discovery of a new comet.

At dusk on the September 21, Professor Perrins mounted a Herschel-prism on a 12" telescope and scanned the sky in every direction in the neighborhood of the sun as it slowly sank below the horizon, however, the comet had disappeared.

About the first week of November, 1896, as dusk was descending on San Francisco, His Honor, Mayor Sutro, drove up in his carriage to his mansion which was west of the city and overlooked the Pacific. Members of his household staff rushed out to meet him with a remarkable story.

It seems a strange object had hovered in the air just offshore over Seal Rock. The darkness had masked the features of the unknown aerial thing, but a powerful light had been discernable on the rear portion as well as a row of lights down its side, as the object suddenly flew away toward the east, passing overhead at an estimated 500' altitude.

The Mayor noticed that his servants were full of wonderment as they told of the sight. He gave the episode no more thought for two weeks.