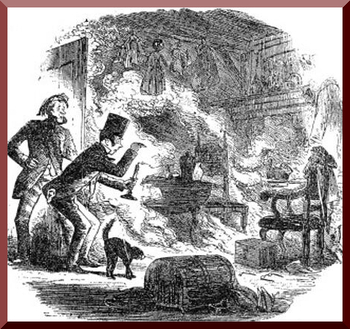 In 1725, Nicole Miller was found dead, burned to death, her incinerated body found in an unburned chair. Her husband was arrested and accused of the murder.

He was acquitted at trial when surgeon Nicholas Le Cat convinced the court Nicole Miller was a victim of Spontaneous Human Combustion. The final verdict proclaimed that Nicole had died by a visitation of God.

Charles Dickens mentioned this case in the preface to the 1853 printing of Bleak House, giving credence to his use of the phenomena to kill off a character in the following passage:

The neighbors, perceiving a strong smell of smoke, entered her room, and there found the unfortunate woman upon the floor almost completely burned, with her feet turned towards the chimney place, in which, however there was no fire.

The face and hair and portion of the neck, and upper part of the shoulders, were not injured. The skin and muscles of the back were, however, thoroughly burnt, as were the sides, and the anterior portion of the trunk. There was nothing left of the upper extremities but the bones. The upper portions of the lower limbs were also burnt. Under one of her arms there was still a portion of the chair upon which she had been seated, and under her an earthen pot, such as is used by the poor to hold a few coals to warm their feet. The chair was almost completely burned, the floor was covered with a black soot and an exposed beam in the wall of the room was charred upon the surface. The chest was untouched, as was also the muslin curtains, only three feet distant from the body.

The above, created from Dickens’s imagination was remarkably on target in describing the syndrome. In the preface Dickens speaks of the Miller case but avoids mention of the victim’s name. He also refers to surgeon Le Cat as a historian, while others contend he was a key character in the defense, testifying as to the validity of the syndrome and the likelihood spontaneous human combustion caused Nicole Miller’s death.

Joe Nickell, a detective who has made an extensive study of SHC cases, states in Secrets of the Supernatural, the Miller event actually happened in February of 1725. Nickell reported some vertebra, a part of her head, and some parts of her lower extremities were found on the floor in her kitchen, not in a chair. He contended the part of the floor where the remains were found was also burned. Nickell also reported the husband’s arrest was precipitated by discovery of his alleged motive, an intrigue with a female servant.

Nickell said the husband was convicted of his wife’s murder, a decision later reversed by a higher court which attributed her death to spontaneous human combustion. Citing a number of respected publications, Nickell presents some intriguing information about this dramatic case.

Mrs. Miller was in the habit of getting intoxicated every day and was last seen entering the kitchen to warm herself. Her remains were found a foot and a half from the kitchen hearth fire.

From this, Nickell deduced the victim got drunk, passed out on or near the hearth then died when her clothes caught fire.