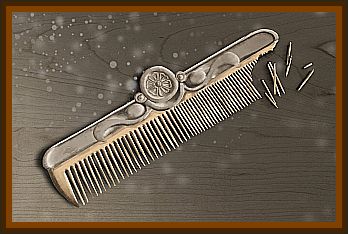 In the 1930s, a 45 year old man named John Negus was employed as a crane operator at Storeton Quarry in Bebington.

The stones hewn from the quarry were not only used locally to build the magnificent villas around Birkenhead Park, Storeton stone was also exported to New York to clad the world famous Empire State building.

During the continual excavations and chiselling at Storeton quarry in 1935, it is said that a strange artefact was found. It was a black comb, made of some marble like stone, and it had 9 teeth.

Instead of handing the apparently stone aged comb to archaeologists, John Negus took the comb home to his house in Rock Ferry.

Negus showed his wife Teresa the comb, and she told him to throw it away.

Teresa was psychic, and she thought the black comb gave off eerie impressions of death and evil.

John thought his wife's alleged psychical skills, or sikey mumbo jumbo, as he called it, were just the result of Teresa being brought up by an eccentric superstitious mother and fanatically religious father.

That night though, John had a strange dream about the comb. In the dream he could see a woman with long blonde hair sitting on a stool in some old dark room. The woman was leaning forward, with her hair covering her face, and she was combing her locks with the very comb John had brought home from the quarry.

As John looked on, he somehow knew that the woman would kill him as soon as she stopped combing her hair. Sure enough, the woman in black combed slower and slower, and suddenly she raised the comb above her head, and it turned into a long bladed knife.

As she got ready to throw the knife at John, he yelled out and woke up in a sweat.

That same terrifying nightmare repeated itself three times that night in the dreaming mind of the crane operator. In the end, John refused to go back to sleep, because he knew that if the woman threw the knife at him, he would die from the shock.

John's wife Teresa pleaded with her husband to throw away the accursed comb, and John agreed, but he couldn't find the ancient relic.

It transpired that his nine year old son had been playing with the comb somewhere in the house and had mislaid it.

John and Teresa looked everywhere, but were unable to find the haunted object.

John sat up in bed, trembling as sleep crept over him. He told his wife how he had seen the comb turn into a knife in the woman's hand, and how she had hurled it at him. The knife had been in mid air as he awakened just in time. Teresa begged her husband to sleep at her mother's, but John would hear none of it, and he wondered if the dreams were just some sign that he was losing his mind.

At 3:00 a.m., Teresa dozed off for a while, and when she awoke, she felt the empty space beside her. She assumed her husband had either left the house to sleep at her mother's, or had gone downstairs to sit up until morning.

Then she saw him lying motionless on the floor besides the bed, and she became hysterical. John was lying on his back, his eyes staring in terror at the ceiling, and his hands clutching at his chest. He was dead.

It is said that the black comb was found not long afterwards at the Negus household, and that it has changed hands and claimed lives many times.

Over and over again I have heard the uncanny tale of the terrifying dream that features the lady combing her hair with a comb that becomes a knife.

If you can wake yourself up before she stops combing you're safe, otherwise, the comb turns into a knife and she throws it at your chest, impaling the heart in one expert throw, and you die in your sleep.