Close Up Sighting Of Circular Craft 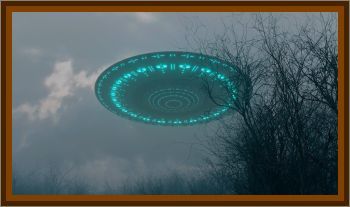 I am reporting what happened to my boyfriend at the time, later my husband and father of my children. We had been dating for about one year. I was 18 and he was 17.

He was coming out to my parents farm, 2+ miles from town, to see me at around 9:00 p.m.. He was driving a small Bridgestone motorcycle and was less than 1 mile out from town, where he lived, and almost to the Burlington Northern railroad tracks when he sensed something above him.

He looked up, a round craft was directly over him at around 100' in the air. It was not very large in size, completely circular, and had green lights, red lights and some yellowish lights on the bottom. There seemed to be some sort of lines in the bottom, like spokes in a wheel look. It was making a low humming sound that resonated. It was almost pitch dark so he couldn't see the color of the craft.

He immediately tried to accelerate the bike to get away from it because he was absolutely terrified. Then he realized that he was staying in one place in the road, even though the bike was still running and it seemed that the tires were still moving. He had driven that road so many times throughout his life and knew every bump in it. He realized later that during this initial few seconds that if he were still driving fast like he had been before seeing the craft he would have already been past the tracks. He remembered cranking the accelerater real hard and the bike didn't speed up.

Then he doesn't remember anything at all, until suddenly he was back on his bike in almost the same spot, with the bike moving, only he was going real slow, like 25 mph, instead of 65 mph from before.

He proceeded to come to see me and never mentioned a thing to me or anyone else.

From my vantage point, I was waiting at the farm and watching the clock, excited to see him and couldn't figure out why he was late. He had called me right before he left town and should have been to my place in 5 minutes. Instead he arrived in about 25 to 30 minutes later. I asked him what took him so long and he acted really weird. I noticed that he looked pale and was quiet all night. In fact I noticed a change in his personality from then on but kept it to myself.

Then, about a month or so after that when we were out on a date, we talked about going and parking at a radio tower near town where all our friends went, a lover's lane kinda spot. We had been there before. So we went there and were sitting for a few minutes when he freaked our and said he had to leave the spot, then proceeded to tell me what had happened with the UFO. Before that he had made fun of me because I believed they existed.

I know this isn't my story to tell. I also know that the experience impacted my life almost as much as his, and I feel it is important to tell it. I don't remember the date or time, but gave a guess. I was, and still am, amazed at how terrified he was, and remained so for many years.

We are no longer married and as far as I know he refuses to talk about it. I think he pushed it out of his conscious mind. At the time, though, I told several friends and family members and he talked about it a couple of times to them, also.