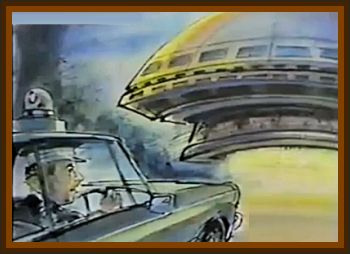 It was Sunday morning when over the police radios I heard the Summit County & Portage County radio operators advising there Patrol Cars of a report of a flying object reported by a woman.

The object appeared to look like a large ice cream cone with point down. The pointed part didn’t look like a solid looked more like light beams. At that time I pulled out and caught up with the Portage County Car and followed behind him on into Pennor. The object was traveling at speeds 85 to 105 mph. At the entrance to Brady Run Park we lost sight of it.

We went on into Bridgeport and then we saw it again. We followed it on into Conway, PA where a Conway Police Officer had his office to call the Greater Pittsburgh Airport. At that time I returned back to East Palestine, OH.