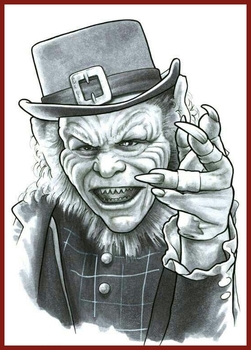 A local woman named Rhona was sitting in her garden knitting when she heard a rustling of the leaves.

Thinking of her sweetheart she pretended not to have heard. Then came a tiny laugh and a tinkling sound from her rose arbor. Looking up she spied 6 handsome little men dressed in green from head to toe, except, that is for a red feather in their caps.

Rhona extended her hand to the group and each in turn alighted on her offered palm. Becoming totally delighted with them she favored them with every courtesy.

Without warning one of the fairies touched his fingers to her eyes, plunging her into darkness. In this state of total blackness she experienced herself moving through what could only be time and space, But this was more than a three dimensional flight. Rhona’s flight had taken her through a fourth dimension.

After what seemed like only a few moments, Rhona felt her feet touch the ground. Opening her eyes she found herself in the most beautiful and wondrous place she had ever seen. Into her vision came lush trees, brilliantly colored song birds, flower gardens and castles of every description shining forth in gold and silver.

Each castle in turn shimmered with diamonds, garnets, pearls and emeralds. Along the streets were magnificently clad little people promenading, resting, dancing and indulging in favorite pastimes. Now, Rhona who noted that she was clad in the same fine manner as everyone else had also become the same size as everyone else. She immediately thought that she could stay there forever, but all at once Rhona was once again plunged into darkness, whisked through the air and dropped safely onto the floor of her rose arbor, where a group of people had gathered concerned over her absence.

It is said that for the rest of her life, Rhona was guarded by the fairies that nourished her with fairy food. At one point local authorities imprisoned Rhona and refused to feed her, but this did not effect Rhona at all, for she was fed daily by the fairies during her enclosure.