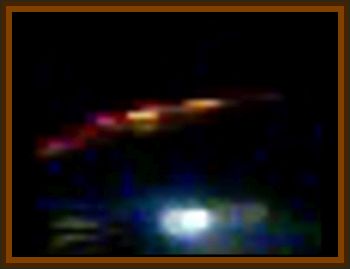 While driving, Ronnie Dawson is constantly working the night shift and runs on deserted rural roads of the County, Coleman, Texas.

One of the clear nights, Ronnie was checking out my tank and while at high altitude, I saw flying over him a strange plane.

Fearing for his life, he quickly went down and began to take off appeared in the sky pulsating orbs that quickly changed its shape. Since then, Ronnie constantly feels that someone or something was watching him.

A Texas oil worker claims to have captured extraordinary evidence of alien life, alleging that photographs he took during an encounter with a UFO depict an extraterrestrial craft with a clearly visible pilot.

Ronny Dawson works as an oil tanker driver, according to the Metro, and encountered the strange UFO in 2011.

Working near a set of oil tanks at night, Dawson spotted the craft as it moved over a nearby stand of trees, before its lights went out.

This thing came right in from outer space, and flew right over me, I was standing on top of these petrol tanks and taking photographs. I hid between the tanks, because it scared the Hell out of me, he recalled.

Dawson managed to capture images of the UFO with his cell phone camera, though since it was a simple flip phone, the quality of the photos leave much to be desired. Despite their low resolution, he asserts that the pictures depict a UFO, an alien pilot within the ship, and a larger mothership.

When zooming closely into the images, Dawson alleges that the UFO's pilot is clearly visible, standing at the edge of a kind of portal. Though he notes that some observers believe the images to be out of focus, Dawson says that they accurately depict the UFO, which exhibited lights that seemed to stretch, even to the naked eye.

The UFO's occupant, meanwhile, appeared to be something even more unusual.

He either has a horn on his head or that's some kind of a helmet. As you can see, he's not the little green alien that they talk about.

Though Dawson is hardly the first person to report an alien craft in the skies over Texas, some UFO researchers find his case to be intriguing.

Nigel Watson, singled out Dawson's sincerity and openness in presenting his evidence, though he pointed out that the UFO images do suffer from issues of quality.

It is not often we get pictures of aliens and UFOs and here the witness seems sincere, and is not an anonymous YouTuber. The frustrating thing is that the images are, as he admits, fuzzy, and it certainly helps that he describes what they represent in more detail.

Watson noted that while Dawson clearly encountered something in the Texas oil fields, it is difficult to say conclusively whether the UFO he spotted was evidence of alien visitation or not.