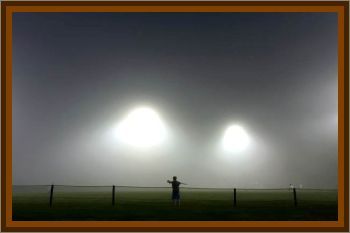 According to International News Service and the Star story, young John J. Swain, 12, son of a farmer near Coldwater, had been returning to the farm from the fields at about 8:00 p.m. on his father’s tractor, when he suddenly spotted a tiny man no more than 20' away behind a terrace in the field.

The small figure had a very long nose and very long ears, and when he moved, he seemed to fly.

John watched as the little man flew over a small hill to a saucer shaped object which was hovering about 5' above the ground. It opened up, and the little man, no bigger than a five-year-old child, then popped inside, the thing lighted up, and then took off at a high rate of speed.

The Swain boy went home and told his parents, they then called the Coldwater sheriff, who came out and questioned him. The sheriff cautioned them to stay away from the place where the boy reported seeing the thing. He came back the next day, and with John and his parents, went out to examine the site of the landing. They found wedge shaped tracks in the soft dirt which did not appear to be human, not made by ordinary shoes. Although it was not made clear, the possibility that the tracks were those of the object has not been discarded, but it does not seem likely for the boy was definite in his assertion that the craft was hovering about 5' off the ground.