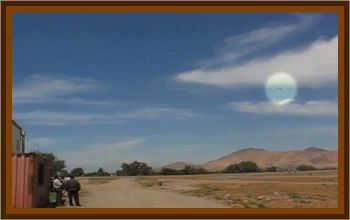 The UFO, witnessed by over 30 people, who described it as a a gigantic disk, dark but not black, with a big orange light on the middle, and small lights that moved around on the outer rim of the object. It hovered at 3,300' above the ground and remained in view for 20 minutes before flying across the lake and into the Andes.

Witnesses described the object as being so big that it seemed to cover the whole valley.

According to ufologist Luis Sanchez Perry, Lago de Colbun has seen many UFO visitations in recent months. Locals call the UFOs robones, thieves, because that they say they steal electricity, Luis reported. Before they had the high tech plant, they didn't have many blackouts, maybe one or two in a month, but now they have three in a week.

UFOs have been seen coming out of Lake Colbun near the high tension wires, absorbing electricity, absorbing water, and some of them have gone at high speed through the valley towards the hydroelectric plant, coming within a few hundred feetof the dam before disappearing.