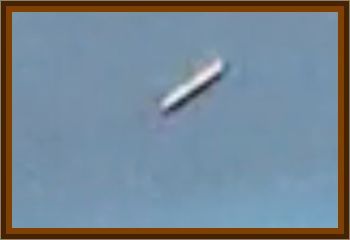 This object was observed by 4 adults and 7 of us kids, I felt a loss of time I can't explain.

I had to have been 3 or 4 years old. But the memory stayed with me all these years.In 1997 living in Los Angeles I went home to visit my mom who is still living and 78 years young.

My conversation started out one day as Mom I know Im not dreaming this but do you remember...before I could finish she said I know what you're going to say and yes you did see it.

So, I went on to describe what I remembered seeing which was a silver cigar shaped object flying above this old school building in the background. She said talk to your aunt she remembers it too. At that time I didnt have the opportunity to do so. But in March of 2002 I was visiting my mother again after her stroke. And at that time my aunt was there too. So we talked about it and she verified the same thing my mom had said yes we did see it. The lights around it and everything. It scared everyone so bad it wasnt talked about except between the two of them. It wasnt discussed even with my uncle nor my father. They checked the papers to see if anyone had reported it because this happened in broad daylight. They listened to the radio but nothing reported.

At that time they didnt want to appear nuts, so they just kept it to themselves. They felt that being it was a beautiful Sunday afternoon and since we saw it others had to have seen it. At that point my mother said no one said a word the adults had been sitting on my aunts front porch and we kids were playing on the sidewalk running in and out of the gate. They just gathered up and we got in the car and were taken home.

Now, thats where our memories differ. I remembered everything they described. But I also remember more. What I can add to the memory is that the object came down and hit hovered above the ground in the field next to the school. It had to bemaybe 4' or 5' above the ground. Given the fact that I was just a child and not tall. I remember looking at the star ship and the lights around it was pulsating around the middle of it like a neon light goes around in a circle. The windows were rectangular panels but their were no seams. It all looked like one piece.

It wasnt a shiny metal craft but it was a silver color. For whatever reason I wasn't afraid. Next, I remember being on the sidewalk across the street from it and in one of the rectangular panels was a little being about my size. This little person was in proportion in size. He appeared to have large eyes and though his dress was like part of him it was as if we communicated through telepathy and he was saying goodbye and he raised his hand as if to wave at me. This is the even more strange part, nothing was moving but me and as I ran back to the gate opening at my aunts house all of a sudden motion started, I felt a slight jolt as things started moving again. Everyone was jumping up gathering us up and getting home in a hurry without saying a word as to what had just happened. I had buried it in my mind until my own son had turned about the same age, I was at the time and began to show me he had some special gifts from God. It triggered that memory in my mind.