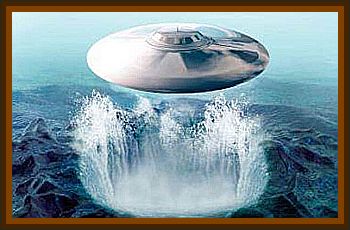 I was married to another engineering student at University of Idaho and I had just graduated with degrees in Chemical Engineeering and Chemistry and her in Mining Engineering. I was interested in UFOs and felt most were explainable and I was uncertain about the rest.

We had just eaten dinner and walked out onto the front deck which overlooked the lake. It was after sunset and still light outside.

We were looking out over the lake when a greenish white glow appeared under the surface of the water. An object raised vertically out of the water, water running off, it was oval and difficult to make out the exact outline of the object due to the light it gave off and was about the size of a semi trailer which is only a rough guess.

The object rose vertically for an estimated several hundred yards to where it was above our horizontal line of site and southwest of us.

The object stopped for a second or two and the next thing we saw was a straight white tapering line of white light going from the last point we saw the object going horizontally out over the northwest horizon as a thread thin white line.

It appeared that whatever it was, accelerated instantly to a speed that made it appear like a straight white bolt of lightning, only that it tapered to invisibly thin over the horizon.

I personally never talked to anyone about this until 3 years after the event occurred because I was so shocked by how unreal it was and that my mind had no reference for such an event such as objects raising from a lake vertically and then zipping off horizontally like a lightning bolt. We heard no sound whatsoever from whatever this was.

I have never even heard of reports like mine from anyone, so it has now been an unsolved puzzle in my mind for over 30 years that has only served to make me wonder what on earth is going on and only fueled my quest for knowledge on the subject of UFOs which, as a scientist/engineer, I take very very seriously and would love to see the human race as a whole get to the bottom of this and with full open cooperation of universities and governments, which unfortunately has not happened and is a disgrace.)