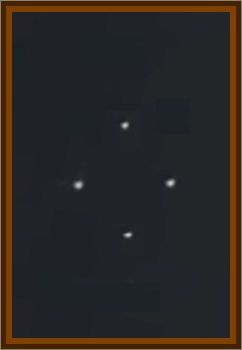 At least 2 Cocoa Police officers, and several other persons observed four round objects the size of a pea held at arm's length in a diamond formation that appeared to be stationary in the sky. The objects were colored orange, white or green during the period of observation.

Two other policemen in front of the police headquarters observed a yellow light with a ring around it at approximately 11:30 p.m. The object bobbed back and forth and appeared to be the size of a 50¢ piece held at arms length. The object was observed for several minutes.