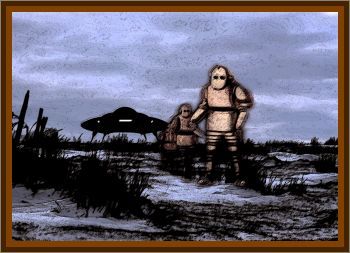 Two men allegedly went duck hunting in an area about two hours walking distance from the town. Arriving at their destination, they separated as was their custom. Teixeira took up his station near the water of the bay and Serrate climbed a tree to watch for ducks.

Shortly, Francisco sighted an unusual aircraft passing over his head. It passed on and landed on the surface of the water about 150' from his location. It made no sound.

The craft didn’t make a sound. On the rear, there was a tube at each side, curved, about 2" in diameter. The craft itself was about 13' in length, about 8' wide and 6½' in height. The bottom was in the shape of a basin and made of blue metal. The vertical structure, about 40" high, was made of glass or similar material. The covering was rounded, supported on the glass and held by metallic bars existing on the inside with no rivets on the outside. On the rear, there was also a kind of rudder, a system like a dolphin tail about 40" in length and about 20" wide. The whole craft was dark blue in color.

On the inside, there were six people seated three on each side, four being men and two women, all apparently no more than 20 years old. They appeared to be of medium height and had red hair, white skin, and reddish color on their faces. The women had long hair to the shoulders, parted on the side. All were wearing thick clothes of the same color as the craft.

As soon as the strangers noticed they were being observed, the craft took off. They made no sign toward me. I was less than 9' from them when they discovered that I was watching them. As the object took off, it made no sound and I saw no smoke. It disappeared in a second at incredible speed.