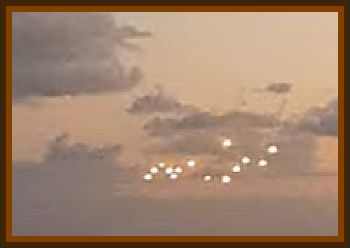 Were they the search lights of some prankters? Were they secret experiments by national or international government agencies?

I think neither. The colors they displayed were not for FX, but I believe they corresponded to their speeds, ultra-blue/white = quick, well beyond supersonic speeds, maybe even, the speed of light, while umbers/reds = slow, motionless speeds.

These crafts were able to come together in V formations and a single upright circle. I didn’t hear a single sound and I wasn’t covered in a speck of dust, perhaps though, because they seemed to be several hundreds of feet above me, at angle.

They made manoevres in the sky, unknown to any aircraft I’ve ever seen make. That’s why I immediately thought pranksters playing with powerful search lights. This notion, however, was quickly dismissed when I saw them changed colors, one by one from red to orange/yellow then slowly fly off, breaking the motionless upright to flat circular formation that they had previously assumed.

As they flew off slowly, their lights changing from reds/oranges/yellows, their speeds increased, they adopted the V formation again, then changed colors to electric blues, they were pretty high above the ground.

I’ve never before nor after seen any vehicle move at such incredible speeds. Off they went into the southeast or southwest regions of the sky.