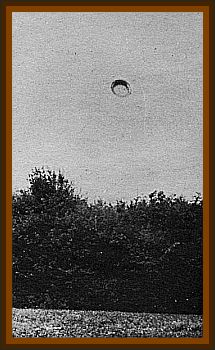 One among the series of 4 photographs of a diurnal disk captured on photograph near Cluj in Romania.

The weather was splendid, 36°C without any wind while Barnea and his friend Miss Matea walked in the forest with a couple of friends. His friend shouted that she sees something, and when he joined her he also saw a large round object, of metallic appearance and shining in the sun in the sky above the top of the trees.

Amazed, Barnea remembered all the same that he had his camera and while the UFO advanced slowly changing direction and increasing its luminosity, then accelerating until he disappeared at the horizon, he had time to take 4 photographs.

According to him, the object was at an altitude of approximately 2000' considering a 85° elevation on this photography, and 100' in diameter.