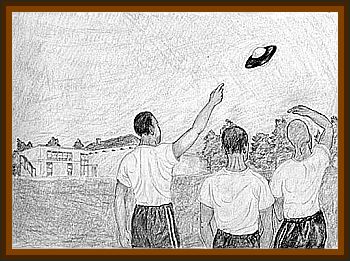 About 7:45 p.m., they spotted a strange object in the sky. 3 of them, brothers Luke, Adam and Jacob, were interviewed on April 29.

3 brothers were playing soccer with 2 friends at Cloverdale School, when one looked up in the clear sky and noticed a disk shaped object that was silently moving in an easterly direction. The black or dark blue disk had white domes on top and bottom. It was constantly wobbling about its vertical axis, like a plate spinning on a table, which allowed the viewing of the top dome that was otherwise hidden by the saucer’s base.

The initial size of the object was about the width of three fingers held up at arm’s length. The witnesses watched it as it travelled east in a horizontal direction and then started to rise higher into the sky as it got further away and eventually got too small to see. Although it was hard to estimate the altitude, speed and size of the object, the witnesses thought it might be anywhere from 5' to 50' across and travelling as fast as an airplane. The total viewing time was about 3 minutes. The boys talked about the sighting for about 10 minutes after it disappeared, but couldn’t figure out a satisfactory explanation for the object.

The 3 brothers appeared with Graham Conway on the Jeff Rense Radio Show.

While the sighting might possibly sound like an oddly shaped, wind blown helium balloon, certain aspects of the report don’t seem to support this possible explanation. Reported speed, horizontal movement. The wobbling motion might be observed in a balloon that was weighted in the base, but even in these circumstances, the motion would tend to be random, rather than a constant spinning/wobble.

The reported size of the object would tend to indicate that if it were a balloon, it was either very close or very large.

The boys themselves indicated that they had wondered if it might be a balloon, but seemed quite sure that it was more likely from an advanced technology, one friend proposed maybe a satellite or solar panel.