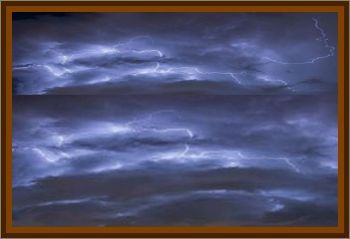 During the Cuban Missile Crisis, our B-52's, KC 135's, and U2 planes formed a net around Cuba in the air, and the navy at Roosevelt Road controlled the seas. Transport troop carriers were parked on the taxi way ready for drop on missile sites in Cuba.

At 5:30 a.m., while waiting for relief on the taxi way, I noticed off in the distance over the Caribbean Sea an usual cloud, with flashing lights within it. My canine flight and I watched and radioed each other to try to figure out what it was, because the trajectory of the cloud was headed towards the no fly zone.

The relief arrived, and we were picked up and driven across the active runway, still watching the object headed towards the parked B-52's alert area.

When we arrived at the armory within the restricted area, the cloud was there. It was drifting 30' above the ground, approximately 6' thick and 30' in diameter. Dark swirls of clouds and lights swirled around the object. The only thing that was visible were the lights spinning inside the dark swirling cloud like a carousel. Green, orange, yellow and blue.

Our entire alert crew came out of the mole hole to watch. There were many mechanics, other flight crews and airmen observing as well.

The object passed us and headed towards the U2 hanger, which was strictly off limits. My only concern was that nobody shot at whatever this object was. We all had our firearms, standing there watching it until it disappeared.

After the incident I went off duty for 3 days leave. Nobody told me not to talk about it.

The only person I told was my mother. After the Ramey Airforce Base was decommissioned, I told my sons.