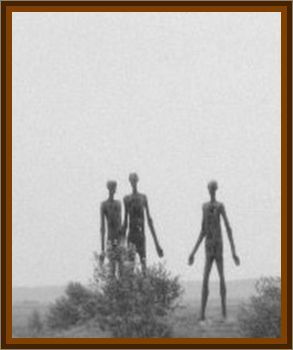 The main witness and his wife had bought a ranch in an isolated area in 1975 and for more than a year they had been experiencing strange sounds, UFO manifestations and Bigfoot sightings on the property. There were some cattle mutilations as well.

One night him and the eldest son went up to the top of a hill to examine a burned spot from the previous year. As they sat in the car, a beam of yellow light shone on them from nearby woods.

Walking towards the trees, they discovered a buzzing black box, clearly seen in the light of the full moon. As they approached, it changed tone, now sounding like a swarm of angry bees. The two retreated to the safety of the car.

The witness told the young man to stay by the car and went back to the spot where the black box had been, it was now gone. He saw a light in the trees and, walking toward the light, came upon two individuals standing near the light source. As he approached, they spoke to him, saying:

How nice of you to come.

Some distance away, down a slope, was a disk, illuminated, about 50' or 60' away. The two beings apologized for the trouble they had caused, promising a more equitable arrangement. They told him several things he was not to repeat, but which had no special meaning for him at the time.

They regretted damage done to several of the cars, but they did not acknowledge responsibility for any of the local cattle mutilations. They told him he was wise to have backed off from the black box, which was nearby. They pointed in a particular direction and the tone on the box changed, as it did, a Bigfoot type creature got up off the ground and walked toward the box. The tone changed and the creature dropped.

In appearance the beings were similar, human looking about 5’6" in height, and wearing a tight fitting outfit like a flight uniform. The suits changed colors from brown to silver. Their complexions were fair and they had blond hair, not long. The most notable features were the eyes, which were very large but otherwise normal looking. They were different in subtle ways but could pass as humans in ordinary situations.

Before the witness walked away from the scene he was told by the beings that he would see them again.