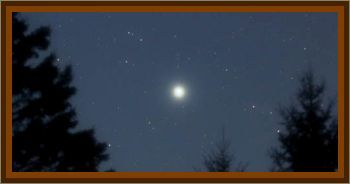 It was just before noon on a warm sunny day, I was 16 yrs old. Riding in the car with my brother in law driving, my sister riding in the front passenger seat, I was sitting in the back of a 1948 Plymouth. We were heading to a wedding breakfast at a place caalled Naamans Teahouse on the corner of Naamans rd. RT 92 and Philadelphia Pike RT 13.

As we turned onto the driveway of the Teahouse and parked, I got out of the car, it was a four door. I stood up and was facing toward the Delaware River. There is a refinery, Sun oil Co, In Marcus Hook PA. Where the Teahouse is located on the border of PA. & DE about a mile north of where were.

I barely had time to say look!, to my brother in law, and out a bright white cloud came this huge almost silver disk shaped object. It was headed torward our direction maybe about 600' in the air.

From our vantage point it traveled about maybe 2 miles toward a stand of trees. No sooner had we seen it, it bcame ghostlike, as it headed toward a bank of puffy white clouds and became invisible again. This of course was before Star Trek and how they used a cloaking device.

If it were possible to have seen this craft up close, it would have been at least 300' in diameter. I said to my brother in law did you see that? He said yeah! I said do we report it? he said nah, no one would believe us anyway.

That was nearly 50 yaers ago and I have never forgotten that incident or how the UFO looked. I'm 66 years old now and live about 2 miles from the Naamans Teahouse and will always visualize that craft when I pass by.