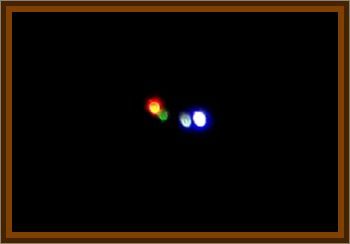 At 3:00 a.m. Mr. and Mrs. John X. Doe, Clarenville, Newfoundland observed the following described object for approximately two hours. Mr. Doe observed it with the aid of binoculars from outside his residence.

The sky was clear at this time and the object was observed over Random Island, Trinity Bay, Newfoundland.

Object described as circular, 35' to 40' in diameter, flashing red, blue and yellow lights. It was approximately 500' above sea level and there was no movement.

Mrs. Doe reported, this to the Department of National Defence, Gander, Newfoundland, at the time.

The following described object was also witnessed by Mrs. Doe, and constable John Y. Doe of this Detachment, Clarenville.

This object was observed with the aid of binoculars and a telescope from outside the Doe residence. The sky was clear at this time and the object was observed at an altitude of approximately 3000'to 4000'. Object was decribed as oval shaped with a large triangular shaped fin on top, completely white with red, white and blue flashing lights and very bright. the object was stationary for approximately one hour at which time it moved straight up at a slow rate of speed. This has been reported to Department of National Defence, Gander, Newfoundland.