Witnesses Observe Near Landing Of UFO 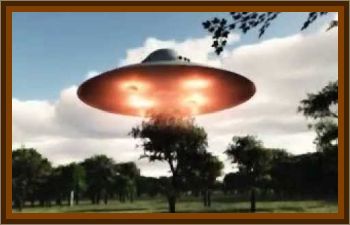 At 1:00 a.m., a manufacturing plant worker was carrying two buckets of water toward his garden in Claremont, when he saw a bright round object float in a gentle arc low in the sky to the northeast.

It looked like a full moon but was at an extremely low altitude. The UFO disappeared behind some trees. Running back into his apartment, the witness checked the time.

Shortly thereafter, a land surveyor and his wife had retired after working in the rock garden of their new home less than two miles from the residence of the plant worker. It was 2:00 a.m. when they saw a dome shaped object. It was about 20' wide and hovered approximately 10' above the ground. They estimated its distance from them at 230'.

The object was moving slowly, causing shadows on some freshly cut hay, these shadows made effects of people moving, the husband reported to NICAP.

The UFO shone a 20' wide gray colored beam of light onto the ground. The frightened witnesses said their children and dogs were highly disturbed.

Our children were very restless, the wife stated. They were moaning as if something was hurting them, They were actually crying out in their sleep. They normally are both very quiet sleepers, and once they are in bed they do not wake up unless they are sick. Our German shepherd was whimpering and whining as if something was hurting her, my poodle was most upset. He sleeps in our bedroom and he pawed the side of the bed until I put him in bed with us. He was actually shaking from being so upset. As soon as the object left both dogs quieted down and went to sleep.

My fear for the children was what upset me most. I kept saying to my husband, what was going to happen to the poor children if someone should come to the house?

Both felt isolated and terrified. The husband wanted to drive for help, but his wife refused to let him leave. They heard a high pitched humming sound, like that of a utility pole transformer. A few minutes later, the object moved about 25' to the east and remained there until 4:30 a.m. At this time, the humming sound grew very loud. The light brightened to high intensity, and the UFO started moving to the west, clearing the trees and disappearing.

During this time, the wife said, I thought of all kinds of things. I keep hearing sounds throughout the house. Any other night, they wouldn't have meant a thing, but tonight, they were most terrifying.

While they were watching the object, they saw a projection from it descend toward the ground.

Our experience was very terrifying and I hope that it never happens again, the wife concluded. However, if it should, I hope that my husband and I will be prepared by then to handle the matter in a better way.