Woman And Her Dog Scared By UFO 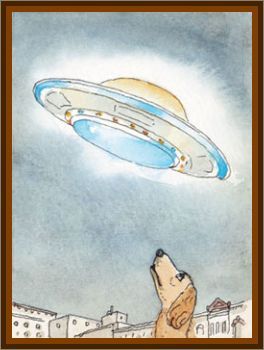 Miss Esther A. Clappison was attracted to a light that shone through a window of her house. She couldn’t imagine what could have caused it, so she went out to the front porch of her house, accompanied by her dog George. Upon reaching the porch, she was surprised to see a rectangular object which appeared to be on the ground at the intersection of two roads.

At first shocked, she overcame the emotion and decided that she should try to observe as much as possible and because of the full moon did manage to observe many details.

She became aware that three men were present, two inside the craft whom she could see through a window or port and another outside. One of those inside could be seen to make signs to the man on the outside to the right end of the craft. At the same time, the man outside seemed to be trying to attract the attention of the men on the inside.

During this interlude, the man on the inside, who was gesticulating to the man on the outside, seemed to be attempting to conceal something with his body, which Miss Clappison took to be the instrument panel. She said that he kept looking backward as if to see if his arm was covering something. The man or humanoid located on the outside of the craft seemed to be picking up samples of something, objects or rocks, not dirt, she thought, because he was picking and not scooping.

Miss Clappison said that she tried to get closer, but could not because the old dog wouldn’t allow her to do so, he just pushed her back. He didn’t bark, she said, but it was obvious that he was scared to death and would not let her go further. He was trembling and cowering and shoving against her to keep her back.

She decided to go inside the house, being afraid by now, and to tell her brother about the strange apparition. When she arrived inside the house, she looked out through a window and found that there was nothing where the craft had been seconds before. She then went outside again and found nothing.

Miss Clappison estimated that the craft was possibly between 10' to 13' in length, but the burned area which was found at the site where the object had hovered, was just over 20'.

In October, when investigators arrived, the grass was still blackened and had not grown.

Miss Clappison estimated that the height of the three humanoids could not have been over 5' tall and their faces were covered. But, she said, their hands were the things that got me. They were like mittens, not exactly like a skidoo mitten, but the thumbs, very prominent thumbs going into points, but I gathered that was why he was having difficulty picking up the rocks. The hands were very obvious and the wrists were very obvious.

Their clothing was a kind of olive green to drab green and all that she observed was seen by the light of the ship. However, the moon was full that night and it is possible that it added to the illumination.

Miss Clappison kept trying to describe what she called the instrument panel, which she felt the humanoid aboard was trying to conceal. It went right across the thing and was about 15" and straight down, but there seemed to be darker shapes on the down part.

Her description here leaves much to be desired, but her very inability to describe what she saw tends to lend credence to her story.

However, we might here call attention to her difficulty in describing the hands, they seemed to be claw like in the manner of those in several other reports.