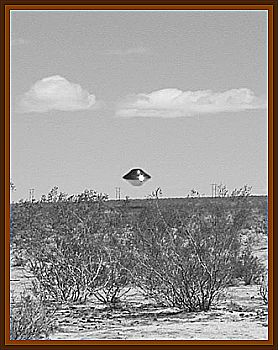 During a missile test using a drone F6F and an F9 as the firing aircraft, several chase aircraft and the observer saw an unusual orange colored object.

The drone aircraft was flying on a heading of 340º and had already passed my station which was about 23,000' downrange from ground zero. The firing craft was flying a tail on pattern and as it came into view an elliptical object appeared behind and above it. The object came down in a curve until it was flying same course as the firing aircraft and came up rapidly behind it until, here I am using my own judgement to estimate distance and size, it was roughly a ¼ of a mile behind the aircraft, and then simply disappeared.

If it was at the same distance as the F9 I would have judged it to be approximately one third the size of the aircraft. It was a glowing orange in color. The drone that was up that day was painted fire orange which was flat in comparison to the color of the UFO.

As I recall the weather, it was an overcast day, temperature probably down in the 30s. I would estimate that the object first appeared 2 to 3 miles behind the F9 and about 2,000' to 3,000' above it.

She had seen objects like this several times before and had attempted to photograph them. One attempt failed because the wrong film was in the instrument. The other attempt showed no object when processed. She had not reported other incidents because they had no additional witnesses.

Dr. James McDonald did go out to investigate the location of the observation and several other reports from China Lake.