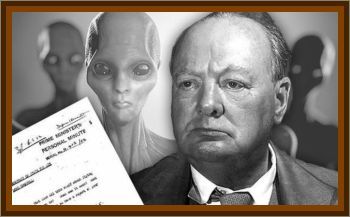 According to records released on August 5, 2010, British wartime prime minister Winston Churchill banned the reporting for 50 years of an alleged UFO event should be immediately classified since it would create mass panic among the general population and destroy one's belief in the Church.

Reports given to Churchill claimed the incident allegedly involved a Royal Air Force reconnaissance plane returning from a mission in France or Germany toward the end of the Second World War.

It was over or near the English coastline when it was allegedly suddenly intercepted by a strange metallic object that matched the aircraft's course and speed for a time before accelerating away and disappearing.

The plane's crew were reported to have photographed the object, which they said had hovered noiselessly near the aircraft, before moving off. According to the documents, details of the cover-up emerged when the man wrote to the government in 1999 seeking to find out more about the incident. He described how his grandfather, who served with the RAF in the Second World War, was present when Churchill and U.S. General Dwight Eisenhower discussed how to deal with the UFO encounter.