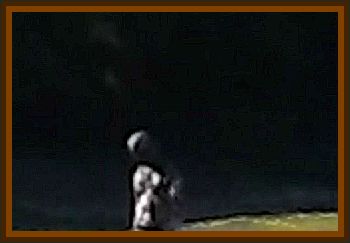 The 41 year old witness was driving back alone in her car after visiting her parents on the #7 road. When as she was about to cross a bridge she spotted something shiny white & phosphorescent on the right side of the road.

There was a faint hissing noise that seemed to be connected with the object, which was suspended at maybe 8" or so off the ground at some nearby wasteland. She pulled up so she could get a closer look when she noticed a person about 4½' or so high moving about near it.

She thought it could have been a UFO and a bizarre idea came to her head, she thought maybe if she could grab an occupant of a UFO and take him to the newspapers. She stopped the car and noticed that by now there were 8 figures around the machine, engrossed in looking at something or other on the ground.

The object was shaped like a flattened pumpkin, with luminous facets that doubtless were windows. She then noticed 2 more beings inside the machine. The others, outside, seemed to be studying the waste ground there.

When the humanoids noticed the witness approaching them, with no signs of fear, they quickly ran into an opening in the base of the craft. The last one of them, the one she was aiming to grab, turned around and fixed his large black eyes on her intensely as if wanting to say something. But just as she was about to grab him a beam of light shot out from one of the windows on the upper part of the machine and engulfed her and paralyzed her on the spot. She could not move any part of her body except her eyes. Terrified she watched all of the humanoids go into the machine, and then the brightness of the beam of light started to fade and she was able to back away and escape to her car.

She sat in the car unable to move again and heard a sort of scraping noise that sounded metallic. Minutes later the hissing noise from the machine became intensely louder, and it slowly started to rise until it was at the height of the tops of the big palm trees fringing the road. The machine stopped momentarily, and then took off at a top speed. The entire craft turned orange and then red as its speed increased.

She described the beings as clad in grayish/blue tightly fitting one piece combination garments. They had large and quite protuberant black eyes, almost no nose, but their nostril holes were visible and they had a slit where the mouth should had been. They were slim as though they had no muscles. Their arms were longer in proportion than normal and their heads were proportionately larger than humans also.

The witness reported beneficial after effects after the encounter, including an increase of intelligent and some pre cognition abilities and dreams. Her health also greatly increased.