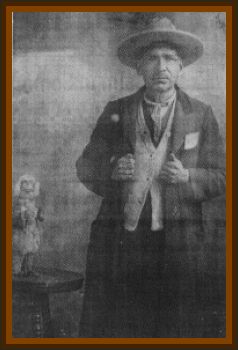 By a photographer for the Ardmore, OK newspaper in the 1920s.

The story goes that the photographer could not see him until after the picture was developed.

No other Native American conjurer can claim to have one, until now.

We not only have a Little People Specimen, but it comes to life and performs magic with us in our show.

In order to make them stand out even more, Bobby and Jeramy do tricks that no other magicians perform, including incorporating as many of their Indian legends as possible into the magic.

Known to perform dangerous illusions live, previous audiences have seen them describe Cherokee legends that involve bursts of fire, followed by live swarms of red wasps emerging from the palms of their hands.

Jeramy cutting his father Bobby’s arm, with live scorpions crawling from the wound.

5' black snakes hatching from hollow eggs, drawings of snakes becoming alive and crawling from the page at their command.

Pulling dreams and nightmares from audience members heads while they hold a dream catcher.

And their signature trick, was Bobby setting his son Jeramy’s head on fire, burning him to a skull, and restoring him to life.

Besides performing close up, stage, and street magic they are also the only magicians working to preserve their Cherokee culture with magic.

Because they are constantly growing and expanding their knowledge, they rarely perform the same show twice for any given audience.