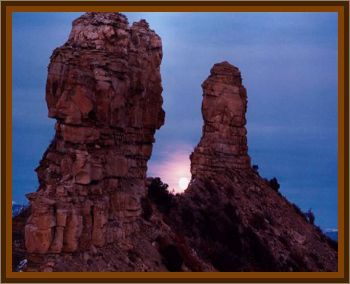 Patsey Reaves, a widow woman, who lives near the Appalachian Mountain, declared, that about 6:00 p.m., her daughter Elizabeth, about 8 years old, was in the cotton field, about ten poles from the dwelling house, which stands by computation, six furlongs from the Chimney Mountain, and that Elizabeth told her brother Morgan, aged 11 years, that there was a man on the mountain.

Morgan was incredulous at first, but the little girl affirmed it, and said she saw him, rolling rocks or picking up sticks, adding that she saw a heap of people.

Morgan then went to the place where she was, and called out, saying that he saw a thousand or ten thousand things flying in the air. On which Polly, daughter of Mrs. Reaves, a good four years, and a Negro woman, ran out to the children and called Mrs. Reaves to see what a sight yonder was. Mrs. Reaves says she went about 8 poles towards them, and, without any sensible alarm or fright, she turned towards the Chimney Mountain, and discovered a very numerous crowd of beings resembling the human species but could not discern any particular members of the human body, nor distinction of sexes, that they were of every size, from the tallest men down to the least infants, that there were more of the small than of the full grown, that they were all clad with brilliant white raiment, but could not describe any form of their garment, that they appeared to rise off the mountain south of said rock, and about as high, that a considerable part of the mountain’s top was visible about this shining host, that they moved in a northern direction, and collected about the top of Chimney Rock.

When all but a few had reached said rock, two seemed to rise together and behind them about 2', a third rose.

These three moved with great agility towards the crowd, and had the nearest resemblance of two men of any before seen. While beholding those three her eyes were attracted by three more rising nearly from the same place, and moving swiftly in the same order and direction. After these, several others rose and went toward the rock. The sighting went on for about an hour, during which time Mrs. Reaves sent for Mr. Robert Siercy. The latter was reluctant to come as he expected to see nothing extraordinary, but after a second messenger was sent to him he finally arrived. At first he glanced at the mountain without seeing anything strange, but when he took a second look he said he saw more glittering white appearances of human kind that ever had he seen of men at any general view. He noticed there were entities of different sizes, that they moved in throngs, and that they moved in a semicircular course between him and the rock. Two of the larger beings seemed to go before the others at a distance of about 20 yards, where they vanished out of sight, leaving a solemn and pleasing impression on the mind, accompanied with a diminution of body strength.