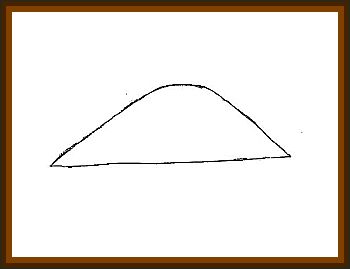 I live in a small city with a small airport.

We are situated in a valley with mountains all around us. My sister and 3 friends had stopped by and we were standing out in the driveway, along with my nephew. It was 10:45 p.m. and a beautiful starry night, with a bright ½ moon. There were 6 of us. My nephew and one of the other males were standing near the car and were looking at the stars both saw the object and called out to us. We looked up and could not believe this large object passing overhead. It was large half a city block and very quiet.

One would never notice this object if you were not looking directly at it. You could see the outline of the object but not the body of it.

When it moved over the stars they were blocked out. This may sound silly but it looked like the spaceships on Star Trek when they were just uncloaking only the outline was visible It went in an easterly direction and without turning it went north and disappeared.

I am 60 years old and have never seen anything quite so amazing. I lived in the Prairies where the night sky is like a wide screen TV where you can see in every direction. I have seen some pretty weird things in the sky but never so close.