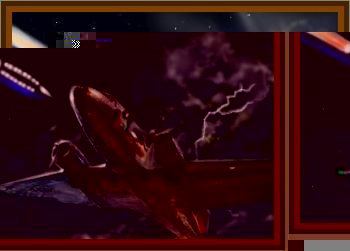 In the early morning hours, Pilot Clarence Chiles & co-pilot John Whitted were flying an Eastern Airlines Douglas DC-3 from Mobile, Alabama to Montgomery, at about 5000' altitude, about 2:45 a.m., Chiles spotted a hazy red cloud, somewhat similar to aircraft exhaust. It was slightly above them, and to the front-right of the DC-3 by about half a mile. Chiles saw an aircraft, thinking it the source of the exhaust, pointed it out to Whitted and said, Look, here comes a new Army jet job. However, they quickly realized that the object was unlike a jet plane, and was moving towards them at very high speed.

Air Force Captain Edward J. Ruppelt would write that within a matter of seconds, the UFO was now almost on top of them. Chiles racked the DC-3 into a tight left turn. Just as the UFO flashed by about 700' to the right, the DC-3 hit turbulent air. Whitted looked back just as the UFO pulled up in a steep climb.

Both the pilots had gotten a good look at the UFO and were able to give a good description to the Air Force intelligence team. They had seen the object for about 10 - 15 seconds. Both men described the object as cigar or torpedo-shaped, about 100' in length, and about three times the diameter of a B-29 bomber. The fuselage was entirely smooth, with no wings, projections or fins. A bright red-orange exhaust was emanating from the object's rear, and was more orange at the outer edges of the exhaust, but grew redder when it rose in altitude. The exhaust extended approximately 30' to 50' behind the object. They heard no sound from the object as it sped past the DC-3.

Most intriguingly, the pair asserted that the object had what appeared to be two rows of rectangular windows. A few weeks after the sighting, Chiles was to write that there were two rows of windows, which indicated an upper and lower deck, from inside these windows a very bright light was glowing. Underneath the ship there was a blue glow of light. The light from the object was so bright that both men were blinded by its intensity for a few seconds.

There were only a few differences in the observations of the two men. Chiles thought he observed a conical shape the object's nose that was somewhat similar to a radar pole, and he described a glassy window at the object's front that was somewhat similar to a cockpit window. Whitted thought the object was slightly further away than Chiles described, and he did not see the cockpit-like windshield or radar pole at the object's nose. Chiles recalled the exhaust as being less intense, and not flaring out as much as Whitted observed.

Given the early hour of the flight, most of the passengers were asleep. One of them, Clarence L. McKelvie, would later offer corroborative testimony. He asserted that he saw an extraordinarily bright light from his window seat in the aircraft, describing it as unlike lightning. He later told Project Sign investigators that the light seemed to have moved parallel to the plane, but at a higher altitude.

Within seconds of the close encounter, Chiles asked Eastern Airlines flight controllers, via two-way-radio, if any known experimental aircraft were being flown in the region. There were none.