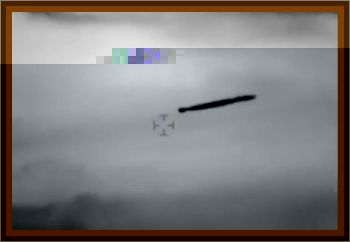 Location: Coast of the Republic of Chile

The first footage of a mystery UFO that has baffled the government for more than two years has finally been released to the public. The clip was recorded on November 11, 2014, by a pilot on board a Chilean Navy helicopter. He was accompanied by a Navy technician, who also witnessed the strange event as he was testing an infra red camera.

Details from the flight suggest the pilot had many years of flying experience. The aircraft was flying at approximately 4,500' and visibility at the time of the sighting was good. The strange object was observed by both men with the naked eye at around 1:52 p.m.

After zooming in with the infra red camera, the pilot then reported the unknown object to air traffic controllers who confirmed that no other plane had been authorized to fly in the area. It also appeared to be undetectable on the helicopter's on board radar.

The pilot stated that the UFO featured two thermal spotlights like discharges that did not coincide with the axel of motion.

The technician observed the object as white with a semi oval shape on the horizontal axis.

The video has since been investigated by the CEFAA, the Chilean government agency which examines UFOs or unidentified aerial phenomena, but they were unable to draw any definite conclustions. General Ricardo Bermúdez, Director of CEFAA during the investigation, said: We do not know what it was, but we do know what it was not.

One theory proposed was that the strange object was a medium haul aircraft, that was coming in for a landing at Santiago airport. But this theory has been debunked by Chilean authorities for several reasons.

1. If the object was a plane, it would have been cleared for landing at the airport and would have responded to radio communications.

2. In Chile, aircraft are not permitted to eject waste material without first seeking permission from the Dirección General de Aeronáutica Civil.

A meteorologist report also says that there were no weather balloons in the sky at the time, and that they don't really fit the shape of the UFO seen in the clip.

An astrophysicist even proposed that the object could simply be space debris, but there are no records of any such objects re-entering the earth's atmosphere at that time.