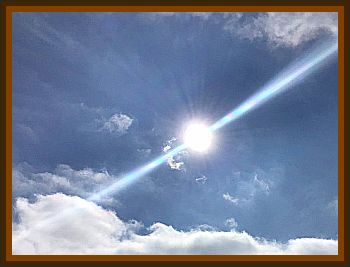 In the early hours, police cruisers came across a powerful silent light that lit them up and vanished after several minutes without a trace.

The deputy chief of the San Salvador police, Amir Methey Doret, said that:

We experienced the curious event when we were returning from a police operation in the rural area north of our Department.

That’s where all 18 of us witnessed a light in the sky that glowed with great intensity. It amazed us that the light seemed to be aimed toward one side, he added.

That powerful light wasn’t a floodlight, with which I am well acquainted, nor was it any other device or aerial optics. I do not think it was a helicopter or airplane either.

After a few minutes of exposure, explained the senior officer:

The silent light began to rise to a considerable height and velocity, until it suddenly vanished, leaving a significant glow or white cloud that began to dissipate like smoke.

The light, which we could see from a considerable distance, was moving sideways and was suddenly gone, leaving a cloud behind.

When asked if it could have originated from an aircraft, Methey Doret said pointblank:

I don’t think so, because at first we thought it might be an aerostate, but we later realized this wasn’t the case, as the light was so strong.

As the hours go by, those of us who were there wonder what crossed our path, reflected the deputy police chief.

Later on, he reported that:

The police cruisers continued running and at no point were communications between the units ever interrupted.

Finally, the deputy chief remarked that other residents of San Salvador saw the strange light headed toward the Villaguay region.