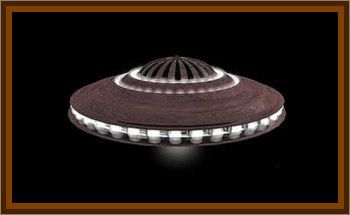 I am 53 years old and live in Ventura, California. This sighting happened quite some time ago.

I was coming home from a band practice at night in Chicago, Illinois, when I happened to look up and notice a circular object with square windows lit with white light. The light in each window flicked on and off from left to right around the portion of the object facing me at a rather rapid rate. There was no sound, and the object remained where it was, between myself and a neighbor's house, for approximately 45 minutes.

I stopped a man in a car and pointed at the object, and his response was something akin to: What the hell is that?

He drove on, and I went home to bring out my parents, and then knocked on the doors of neighbors. Soon, there was quite a group watching the object. Eventually, it began to move very slowly to the west, and we all watched it until it grew smaller and finally disappeared from view.

Years later, in 1973, I was employed at the XXXXXXX laboratory at Northwestern University in Chicago, Illinois, as a Senior XXXXXXX. I happened to notice that Dr. J. Allan Hynek, who had headed up a UFO investigation for the Air Force in the 40's?, I think it was called Project Blue Book, was a visiting professor at the University. I called him and related my experience with the sighting, and he told me that the sighting was still unexplained. He did, however, offer an explanation proferred by some Chicago City department, I think the police department, the day after the sighting.

It seems I and my neighbors weren't the only observers.

The explanation was that the object was an airplane that was carrying behind it a broken electric sign. I told Dr. Hynek that that simply wasn't possible, given that the object hovered for 45 minutes and was noiseless. He agreed, saying that was why it remained unexplained to that day.

If you have heard of this sighting, or know of anyone else who has reported it to you, please let me know. Though I was only 12 or 13 at the time, I have compared notes with my father over the years, and my recollection matches his.