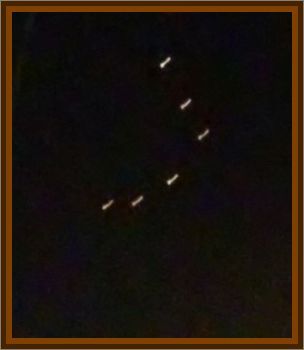 Watching Discovery Science on TV about the Pheonix lights brought to memory an event that happened to me in I think 1970, in either September or October.

A chevron group of lights passed over a town called Gillingham in England travelling in an Easterly direction. A set of lights with 3 on one side and 2 on the other in a chevron, and with no sound.

Exactly the same as the Pheonix sighting that I saw on TV here in England 2 nights ago. At least I thought the same as I saw.

We were told a day after that it was a satellite reentering. I don't think so. A formation and no tails.