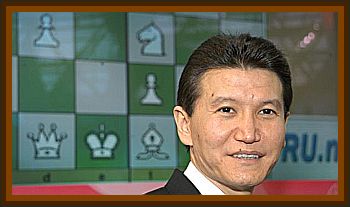 When Kirsan Ilyumzhinov wakes up every day, perhaps he wonders if this will be the day when his extraterrestrial friends will return to bestow new, earthshaking secrets of the universe on him.

That’s right, his ET friends. And this isn’t even a new revelation about the 53 year old former president of the Russian republic of Kalmykia.

His background and position on UFOs and ETs will undoubtedly bring Ilyumzhinov under fresh scrutiny he’s reportedly considering running for president of FIFA, the international governing body of football.

The suggestion has been made but, for myself, I haven’t decided anything about this issue yet, Ilyumzhinov said, according to the Associated Press.

During his Kalmykia presidency, Ilyumzhinov claimed he was abducted by extraterrestrials.

Ilyumzhinov says that, on an evening in September 1997, ETs wearing yellow spacesuits spirited him out of his Moscow home and took him to their spaceship.

Here’s part of an interview he gave in 2007 for an Al Jazeera news report, Meet the President — Kirsan Ilyumzhinov.

I was taken from my apartment in Moscow to this spaceship, and we went to some star and after that, I asked them:

Please bring me back.

They are like people, like us. They have the same mind and the same vision. I talked with them and I understand that we are not alone in this whole world, we are not unique.

I’m not a crazy man, but after I gave the first interview to Radio Freedom in Russia, thousands, not hundreds, thousands of people wrote me letters and called on the phone, saying:

Oh, Kirsan, you are a politician and you are not afraid to talk about it?

Following a 2010 television interview in which Ilyumzhinov freely spoke of his alleged meeting with aliens on a spaceship, a member of the Russian Parliament, Andre Lebedev, voiced several concerns to President Dmitry Medvedev, according to BBC News.

Lebedev wanted to know if Ilyumzhinov was fit to govern.

He is also concerned that, if Ilyumzhinov was abducted, he may have revealed details about his job and state secrets.

Assuming the whole thing was not just a bad joke, it was an historic event and should have been reported to the Kremlin, the BBC quoted Lebedev.

Lebedev also asks if there are official guidelines for what government officials should do if contacted by aliens, especially if those officials have access to state secrets.

Considering his alleged otherworldly encounter and his long term association with FIDE, it’s not surprising to hear Ilyumzhinov make an out of this world connection between aliens and the game of chess.