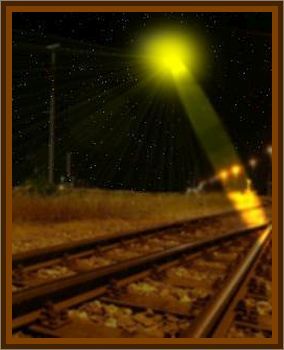 This event, that is almost unknown despite the police finding physical evidence. The witness claimed he saw a UFO hovering over a cemetery before it fired burning laser beams into the ground above a railway line. According to the report. The man, a sensible sort of lad and genuine, according to police, was making his way home after a night out in Widnes, Cheshire, at 2:30 a.m. on July 15, 1996.

A bright yellow light followed the witness, who was crossing a footbridge from Avondale Drive into Upton. He reported the light as two houses high, and it followed him as he tried to walk away. He also informed the police that as it followed him he could hear a high-pitched noise like cats wailing, and then the craft appeared to blast laser beams down to the ground.

When he returned home, he told his father what happened and he returned to the spot with him. They found four railway sleepers smouldering and one with a 4" hole burnt through it.

The official file records that a police officer was sent to the scene and he reported there was no sign of an accelerant being used. The officers report states: One of the sleepers is still smouldering. It does look rather odd. The chief inspector of Cheshire Police was informed and the Aeronautical Information Service, an authority that passes information to the air authorities whose job is to maintain the safety and security of the skies for civilian and military aircraft in UK airspace.