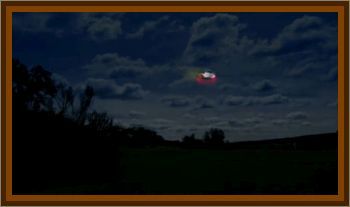 This is a case that caught the attention of the New York State Police and the U.S. Air Force when the sightings allegedly happened on August 19, 1965.

The first sighting occurred around 8:20 p.m., 16 year old Harold Butcher was milking cows in the barn on Aldrich Hill Road where he claims to have seen a shiny silver saucer shaped object.

I think something unusual really did happen, said Robert Galganski, a retired transportation safety researcher who’s examined the sightings extensively over the years. I think the kids actually saw something.

According to various reports, including an investigation done by the National Investigations Committee on Aerial Phenomena (NICAP), Harold reported an unusual noise similar to screeching coming from a bull tethered to a metal pipe in the field.

According to a NICAP report, Harold described it like I have never heard come from an animal before.

Harold eventually rushes to the barn window and reports seeing a football shaped object hovering just above tree level around 500' from the barn. He later described it as having a pair of vertical seams running up and down the side. He estimated the size to be about 50' long and maybe 20' thick, Galganski said. He can’t tell whether the object landed in the pasture or not because there’s an elevation rise between where he was at the barn and the area just before the tree line.

Harold told a NICAP investigator that the object emitted a beeping noise, and that it it descended slowly emitting a red vapor downward from around the edges. He also reported that a radio in the barn was making a heck of a noise like a loud static. At one point, Harold ran outside toward the object and watched it begin to rise in the field. He reported that the red vapor shot from the edges toward the ground.

Harold stated to NICAP that it ascended behind the clouds as fast as a snap of my fingers. The object rises up and disappears in the low lying clouds. And the clouds, according to Harold, turn green, Galganski said.

Robert Butcher remembers his brother Harold running over to the farm house all excited.

He said come quick. There’s a big old flying saucer or something that just landed in the cow pasture, said Robert Butcher, who was 14 years old at the time of the sighting. Not long after a second sighting was reported on the farm. And this time Robert says he caught a glimpse of something strange. I think I remember seeing something orange like coming out of the backside of it, or underneath it or something. I don’t know for sure because it’s been so many years, the younger Butcher stated during a recent interview with a TV station.

And there was a third sighting that same night allegedly witnessed by Harold, Robert, another brother and a friend, according to a NICAP report.

Because increasing darkness obstructed the view, the others reported the glowing yellow vapor, the green glow of the clouds above, and a faint outline of the object, the report stated.

They were serious, recalls former NICAP investigator Jeffrey Gow, who was a college student back in 1965 while working the Cherry Creek case.

He not only interviewed some of the witnesses, but Gow also talked to the troopers who responded that night. The sense I got from the troopers was that they were supporting that something had happened out there on the site. They weren’t dismissing it as it was a hoax. They leaned in the direction of something actually occurring out there, Gow said.

In Gow’s original NICAP report from 1965 he notes that one of the troopers admitted that those reporting the sighting seemed convincing…too rustic to be able to create a hoax of this sort. Gow added: They talked about it. Gave me the details. Most notable was how impressed they were by the atmosphere. In other words, when they said, when we got out there these people were really were excited. Something had really set them off and it was difficult to calm them down.

And it wasn’t just the State Police responding. A U.S.A.F. team from Western New York was dispatched the next day to investigate.

In those days the Air Force investigated UFO sightings under the Project Blue Book program.

According to both teams, both the Air Force and the New York State troopers, these kids were not acting. They were genuinely scared, Galganski added. The Air Force report stated that the investigating officer and three technicians were convinced that the sighting was not a hoax or fabrication. One technician remained unconvinced.

Harold Butcher, who’s now deceased, appeared on the television show Sightings back in 1997. I never seen anything move as fast as this thing moved and disappeared and come back as quick as it did, Harold Butcher said at the time. Whatever he saw still remains a mystery 50 years later.

Robert Butcher, who was just a boy when the Aldrich Hill Road dairy farm became known as the flying saucer farm, said he and his brothers had their own suspicions about what happened. We always thought maybe it was the Air Force or some other country, or something. Didn’t know what it was. Nobody could ever tell us what it was.

The Project Blue Book program, which was terminated in 1969, labeled the Cherry Creek incident as unidentified. Although the sequence of events are dubious, the sighting is carried as unidentified by the Air Force since there is no definite concrete explanation, the Air Force report reads. It means that they cannot explain it as any conventional man made object, any normal phenomena, atmospheric or stellar, or it wasn’t a hoax, Galganski said.

Of the thousands of UFO sighting reports examined by the Air Force over two decades only around 5 percent fall into the unknown category. Cherry Creek is one of the few.

I have seen a number of cases, really tight cases with trained observers, really quite impressive detail that they debunked. Easily debunked. And I expected this one to go the same route because they could have more easily done it to this one. But they didn’t, Gow explained. The Air Force ruling on Cherry Creek also surprised Robert Galganski who believes the agency reluctantly and grudgingly classified the sighting as unidentified.

Some of the explanations that Blue Book came up with were so outlandish that they were more amazing than saying that it was unidentified. Their conclusions are legendary. I mean they’re often quoted as an example of how far this agency would go to debunk UFO reports. Galganski says he noticed some discrepancies in Harold Butcher’s version when he began reinvestigating the case in the 1990s, and interviewed Harold by phone. One that the object had legs, tripod like legs that came out of the bottom which do not appear in any of the NICAP team’s reports. And he had a different color for the object, Galganski said. Over the course of 30 years this is the fish story that gets better and better and better.

In Gow’s original report from 1965, he states that on occasion he noticed Harold coloring in some details of the story. He had a great deal of detail in the story right down to the description of the object and different things that to me seemed a little bit too much detailed, Gow said recently.

Robert Galganski was ready to write off the Cherry Creek incident as a clever hoax. But then he learned of other witness sightings before and after the August 19 incident.

The one that really got his attention involved two state troopers who allegedly saw something strange 28 hours later in the same area. According to a NICAP report, the troopers were on Plank Road, about 1.5 miles from the farm where Harold Butcher reported seeing an object the night before.

Gow remembers the troopers showing him where they were around 1:15 a.m. on August 21. They said it was eerie.

As they looked down on the farm where the Butcher sightings occurred, the troopers reported seeing a straight line, fixed position pattern of lights with a smaller red light in the front. They said it was coming right at us, but it was coming really low. And they said it came right over us and we looked up and there were seven orange, amber circles following the original small light, Gow said.

In the original report, one of the troopers noted that it seemed all eight lights were of the same object. The report also stated that the object was about 2000' to 3000' above our head…it seemed to hold a straight north south course.

When asked what kind of sound the object made as it passed overhead, the troopers stated that the object purred like a bag full of kittens.

You’ve got two people who are trained observers, professionals. And also, unlike the Butchers perhaps, they don’t want publicity among their peers, Gow said. They don’t want to be known as the troopers who were behind the flying saucer. So I would expect them to be much more reticent to voice what they feel. But they seemed sincere. You can’t prove anything of course, but my sense was that they were sincere.

For Galganski, the troopers’ sighting turned out to be more impressive and compelling than what Harold Butcher and his brothers reported seeing the night before. And that was enough for the UFO researcher to reconsider his initial skepticism. I think the kids actually saw something. There was a stimulus. They absolutely saw something, Galganski said.

Jeffrey Gow, who interviewed the Butchers back in 1965, agrees that there was some kind of stimulus that night. Something happened. I feel that something happened out there. What it could have been is any number of things.

Robert Butcher, who’s now 64 years old, knows some people will always be skeptical no matter what. It’s their choice not to believe. All I know is what I saw. I won’t lie to you about it. I don’t believe in lying.