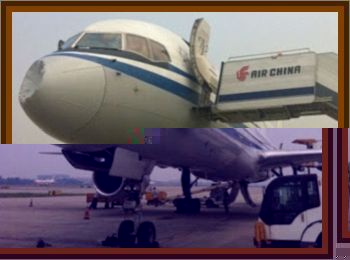 UFOs have been recorded shooting so near to planes that you would think they would hit them. This is a very rare occurrence of such an thing happening. From the shape and size of it, it looks to be a cloud orb that got to close to the nose of the craft. Proof that even aliens get over confident.

Apparently taken after an Air China Boeing 757-200 was involved in a recent incident.

According to The Aviation Herald, the aircraft, registration B-2856, was performing flight CA-4307 from Chengdu to Guangzhou, when a large bang was heard from the nose section of the aircraft and the aircraft performance worsened.

The Boeing 757 was returned to Chengdu for safety reasons and post flight examinations confirmed that the aircraft collided with a foreign object, but what type of object would cause this much damage?

A bird strike has been ruled out (due to lack of blood, feathers or other remains) and theories about the object have ranged from a chunk of ice to UFOs.