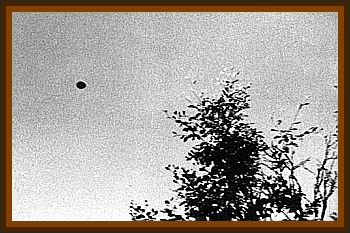 The Lac Chauvet photos first appeared in Aime Michel‘s The Truth about Flying Saucers, which showed a clear diskoid object. The photos were taken by M. Fregnale on July 18, 1952, who would remain convinced until his death that he had seen, and taken pictures, of some natural phenomenon.

He believed that an extraterrestrial origin for the disk was impossible because of the large interstellar distances between star systems.

Only in 1994 were these photos subjected to a careful and detailed examination by Dr. Guerin, a professor at the Institute d’Astrophysique in Paris.

A series of 4 photographs of a disk shaped object apparently flying in the sky was physically analyzed. Certain details led us to develop a mathematical model of the supposed trajectory. The model was validated by measurements on the photographs, which demonstrated that the disk was distant from the camera, flying along a straight and horizontal trajectory, and was not a fabrication.

Andre Fregnale, an engineer and photographer, walked around France’s Lake Chauvet on July 18, 1952, for a great many hours taking pictures of a UFO that came out of the northwest sky. The sky was clear and luminous and the UFO moved in the heavens at an altitude of 3,000' for several hours. The film was developed and analyzed by Pierre Guerin, a well respected astronomer and confirmed the UFO object as real. The photographs have been scrutinized by many experts and all have found them to be real shots of a real UFO.