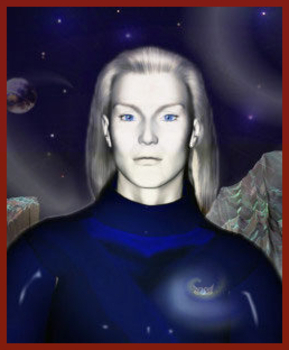 24 year old Edith Jacobsen, her sister, Asta Solvang and her uncle, Halvlan Jacobsen had gone into some nearby fields in order to collect wildflowers, after a while their uncle walked away from the area and both were left alone.

Moments later as both women collected flowers they noticed a strange man that was walking towards them from a certain distance; he had a smile on his face and was making hand gestures towards the women.

The stunned women hesitated as the stranger approached and curious decided not to run away since he looked friendly enough. The stranger wore a greenish coverall, which covered him all the way up to his neck, they could not see any buttons or seams, and it seemed to be a one piece suit. He also wore a very wide belt around his waist. But what really grabbed their attention was the man’s long light brown hair. His eyes were light colored somewhat slanted, his skin was much bronzed.

After gesturing greetings back to the visitor, they asked him who he was and still with the smile on his face the stranger extended his hand towards the women but instead of shaking hands he slightly brushed the palms of her hands with his and then spoke in a sing song type manner and in a language they could not comprehend, even though both women were fluent in English, German, and Russian and were very knowledgeable with other languages such as Spanish and French.

His hands were beautiful said the women, with long well manicured fingers like that of an artist. The stranger seemed to emit an air of friendliness and kindness that left both women very impressed. The man took something out of his coverall that resembled a pencil & what appeared to be a piece of paper, where he proceeded to draw a central point surrounded by several circles, which seemed to represent the orbits of the planets within our solar system. After pointing out the Earth and the moon, the stranger pointed at a planet which the women were unable to distinguish due to their state of excitement.

Moments later he introduced both items back into his tunic through a point which the women were unable to see. At this point both women were feeling a little concerned but the smiling man then motioned for them to follow him. Both women obeyed his wishes and soon arrived at a small clearing on which rested a metallic lenticular shaped object described by the women as resembling 2 bowls placed together with a small dome on top. The object measured some 15' in diameter and about 4' in height. It was gray/blue in color. As they attempted to approach the object the man motioned to them to step back and not approach. The man then opened a hatch at the base of the object and entered it, he then closed the hatch.

The women then heard a slight whistling sound and moments later the object began to rise up into air with a rotating motion. Once the craft had climbed to about 150' it stopped momentarily and then it accelerated its rotating motion quickly rising up into the air in a diagonal trajectory and disappearing from sight.

The women notified the police after the encounter and according to police officials both women were sound of mind and well known in the community.