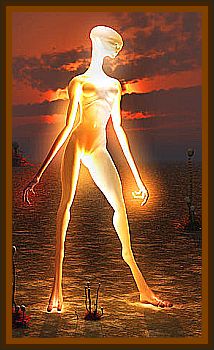 I was woken by what sounded like a metal ball being thrown from one side of my house, downstairs, to another. I was frightened to say the least and hid my head under the duvet on the bed.

The sounds continued, and I remember thinking that if someone had broken in, I would have heard glass breaking. I looked at the clock, it was about 1:10 a.m..

I decided I was being stupid and that I must go to see what was going on. When I sat on the edge of the bed I became aware of a small figure, that seemed to glow, hovering inside my bedroom by the window.

It was ochre colored, with a small round head on a flexible neck emerging from an ochre colored leather like cylinder. I remember being surprised by very large flat feet at the base.

There was nothing frightening about it, just a feeling of niceness and fun. It stretched out 2 long flexible arms”towards me, and that was the last thing I remembered.

I would have dismissed this sighting as just a dream if it had not been for the fact that the previous evening there was a lot of ribbon lightning, but no rain. I went outside to get a better look, when 2 glowing orbs flashed in front of my balcony. The impression was of 2 kittens chasing each another, fun.

Sometime later I read a letter in a magazine reporting the sighting of a large shiny object which appeared to be a space ship near the Jura mountains, close to where I live. I have always regretted not contacting the writer nor keeping a copy of the letter.