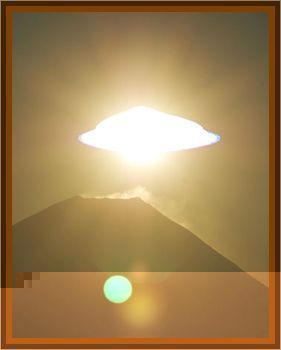 The city of Chilpancingo La Cronica Vespertina newspaper reported the sighting of an unknown light that landed at Cerro Pie de Minas, emitting flashes for over 30 hours and causing alarm among the locals.

The event took place in the early morning hours of December 31, 2007 in the town of Mezcala, Guerrero.

According to the news report from journalist Francisco Rangel, dated January 10, 2008, the phenomenon was observed by the entire town, cutting across all ages ranging from children to senior citizens and including mining engineers and laborers at the Los Filos gold mine.

Eyewitness accounts suggest that drivers halted their vehicles all the way to the Federal Highway in order to take a look at the intense light source that traveled across various parts of the locality at an estimated altitude of 1000'. They describe a saucer shaped craft that passed over the town square slowly and silently before landing on a hill known as Pie de Minas, where it emitted flashes for over 30 hours.

According to the newspaper story, witnesses to the phenomenon complained of eye irritation despite the fact that they saw it at a considerable distance. Not only that, but there is also talk of fluctuations in the level of electric power in spite of the fact that no voltage changes were detected at the electric substation belonging to the Comision Federal de Electricidad.

Many people took photos and videos with their cameras and cellphones, but their recordings were affected and distorted by an alleged magnetic force. They added that even the pictures taken with analog cameras were overexposed.

According to the newspaper article:

The object was seen by most of the population, ranging from small children to the elderly and entire families, seen at considerable distances by the luminosity that affected the eyes of many residents and the fact that the electric levels of all the homes dropped whenever the light’s intensity increased, ranging from a soft shade of light blue to a white and phosphorescent blue, acquiring yellow, orange and soft red tones.

Many video recordings exist in spite of this, taken by people who managed to record it from their homes at a distance of 3 miles away. The footage shows a round light, whether white or light blue, with strange figures at its core that were described, by those who peered at the object through binoculars, as something resembling a cat or a being with horns, causing the greatest degree of fear among the locals, rendering them unable to sleep for the 2 following nights.

The sighting was not made known beyond the confines of the town until the first days of this week, although reports of alleged meteorite activity had been received from Anjelica and Xochipala on January 1st.

Residents of Mezcala say that the inclement weather, strong, cold winds, could have been caused by the luminous UFO which appeared to have landed on the hill known as Pie de Mina in the wilderness known as La V, from where it was filmed by many locals with their diminutive Handycams and who were clearly afraid that something awful would happen, or that the vehicle’s crew would harm them.

Alfonso Ramirez Maya, 35, a farmer and board layer, had a chance to film the UFO with his video camera and his daughter’s cell phone. He showed us the images taken, and those in which the light can be seen moving, but with deformations of the images on the cellphone.

The white light resembles a balloon that changes shape, despite their best efforts at remaining steady. The images were obtained from their house on Calle Francisco Villa n/n, Colonia Cabeza de Culebra, 3 miles from the sighting one mile distant from the Mexico City, Acapulco Federal Highway that passes through Mezcala.

Another person who had the opportunity to record a video was Jesus Santana Hernandez, who filmed the UFO as it flew over the community, but sent the video to Houston so that a relative could make it known through a local TV station, since some thought they could profit from selling the images.

However, the majority of the locals who have the evidence are hesitant to disclose it, as they do not wish to earn themselves a poor reputation or be dismissed as lunatics.

However, they are all willing to discuss the experience after being told that an effort is underway to document the sighting, and even willing to accompany a research group to the site, as it is a rugged terrain filled with rattlesnakes and scorpions.

Many of the people interviewed, among whom were serious individuals of all ages, youths and even children, offered interpretations of the story that agreed with one another’s regarding the sighting of the light on the hill and its transit over the community of Mezcala, further agreeing with the fear and consternation they experienced for the 30 hour span in which the flying saucer was present.

There exists, however, the report of a group that came within 150' of the vessel described as a flying saucer, whose color was similar to that of brilliant, galvanized sheet metal, with a whitish or light blue light.

These people brought with them video and still cameras, but their vehicles were left without power, with no electricity and stalled engines. Furthermore, camera batteries were inexplicably drained despite having been charged, and returned to normal operating conditions later on.

Bold youths who dared approach the UFO clearly heard 2 dry, metallic sounds emerging from the interior of the alleged craft. This spooked them into hiding under their pickup trucks and even made them weep like children, as they believed the occupants would emerge to seize them. This fear prompted them to flee the site as best they could, and they refuse to talk about it.

Closer images were obtained from videos taken from the slopes of Pie de Mina, one mile distant, where the object can be seen as larger, resembling a large white circle of encapsulated light.

Symbols can be made out, and even the shape of a face drawn on a card by another witness, having the shape of a feline or a horned being that appears to be at the center of the light.

To many businessmen in downtown Mezcala, and food vendors who witnessed the phenomenon from the early hours of December 31, also saw the gathering of people who had set out to see the UFO phenomenon and who offered their versions about what it could be.

There were many who recorded videos or took photos, but after the novelty wore off, they became disaffected after making the trip in groups of pickup trucks, accompanied by 2 local sheriffs, without finding anything.

To calm the populace down, they said the sighting had been caused by the clash of high voltage wires that entwined in the strong wind.

The owner of a budget store says that sales declined because people became frightened, and that Mezcala looked like a ghost town as many of its residents fled out of fear, believing that harm would befall them because the vehicle remained on the hillside, emitting powerful flashes skyward even in broad daylight.

There are even those who say that another light above appeared to blink, as if communicating to the one below.

This made them fear the worst, and contributed to restless sleep for 2 nights.

There is much more evidence of the extraordinary event, known as a Close Encounter of the 2nd Kind, CE-2, a variety of eyewitness accounts from an entire community stricken with terror by the tremendous light that lit all of the nearby hills, and even caused the city’s own electric lights to dwindle, all of this amid strong winds and the cold nights of early 2008.

In order to reach the landing site of the luminous UFO, it is necessary to walk for several hours or reach the site on all terrain vehicles, since there could be evidence of some sort to be found where the UFO remained for 30 hours, all the while flashing its lights.

It should be noted that the area has various mineral and metal deposits, such as uranium, cobalt, gold, silver and copper.

A more thorough investigation of what appears to be a genuine UFO case must be performed, verifying if there were any traces left behind at Pie de Minas hill, in the La V wilderness of the community of Mezcala, Municipality of Zumpango del Rio, state of Guerrero.

Other reports involving strange phenomena have been received from other municipalities early this year.