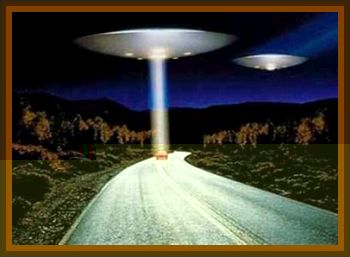 But if you want to hear a real story about a deeply puzzling, completely unidentified event, read on…

My sighting occurred in the winter of 1975 and lasted only about 10 seconds, just long enough for shock to turn to curiosity, and then to an eerie fear. It was enough to make me shout out:

Even though I was alone.

At the time I was going to school upstate, in Rochester NY, in my final year for an engineering degree. Gas was cheap back then, about 33¢ a gallon, so whenever I had a break longer than a weekend I’d drive home to my family in Westchester, just north of New York City.

I had a weird class schedule, front loaded in the beginning of the week, with nothing on Thursdays and only one class on Fridays, which I could often skip. So if I wanted to go home I could cut out on Wednesdays after I finished dinner on my meal plan, about 8:00 p.m., a departure time that suited me just fine because I preferred doing the 7 hour drive mid week and at night when traffic was almost nonexistent.

I had an 8 track in the car, and a bunch of favorite tapes, so I’d whiz along those dark highways listening to music and enjoying the solitude after a frenetic week or so on campus.

The shortest route was to Syracuse on the NY State Thruway, then south on route 81 through the rugged center of the state to Binghamton, and then east along sparsely populated route 17 through the Pocono mountains to Harriman, where I’d rejoin the thruway for the final leg south to home.

The Poconos are not mountains in the sense of the Alps or Rockies, time and repeated waves of glaciation rounded the topography such that the peaks rise just 1000' or 2000' above the valleys, more than hills but much less than real mountains.

It was the middle of February on a cold, clear and moonless night. Visibility was unlimited. I hadn’t seen another car for several minutes in either direction, so my eyes were well adapted to the darkness. It was about 1:30 a.m.

And then it happened. My eye caught something bright out the drivers side window, moving fast. I turned my head and saw 4 lights in a vertical line moving in unison straight downward from high in the sky overhead, with about 5° between them.

They were all the same color, white with a slightly red tint, and about as bright as the taillight of a car from half a mile away. They were small but they had a discernible disk, about the size of a penny if someone held it 10' from you.

As the first one approached the peak of the adjacent hill it slowed down almost to a stop, slid horizontally a few degrees to the left, and then rapidly accelerated straight downward again, disappearing behind the hill.

A second later the next one did exactly the same thing, and then the next.

When the last one dropped near the hill it stopped, went back up several degrees, hovered for a second, and then it too accelerated straight down, also disappearing behind the hill.

It was as if someone high in the sky shot a roman candle downward toward the ground, and the glowing balls somehow had the ability to change speed and reverse course all on their own.

I was close to freaking out. It made absolutely no sense, I instantly knew it was very, very wrong. I was shaken, but there was nothing to do except keep driving. Over the next several minutes I calmed myself and I tried to figure it out rationally.

My first thought was that there was nothing in the sky at all, instead I’d simply mistaken some reflections in the driver side window, closed tight because of the cold.

The problem with that was, there was absolutely no source of light to create such reflections, neither inside the car or out.

Back then most of route 17 had no road lighting. It’s a sparsely populated area to begin with, and at 1:30 a.m. what few houses there may have been were dark.

Inside the car my 8-track emitted only a dull glow from the track indicator, and I had intentionally dimmed the instrument panel lights as I always did upon departure from Rochester. There was simply nothing in the car or out on the landscape that could have caused reflections like that, not even close.

I thought about planes, but they don’t move that way no matter what your viewing angle. Meteors don’t behave like that either, and neither do balloons. Helicopters could, but not with that maneuverability, and they would have more than one light on anyway. Plus helicopters can’t descend that fast, these things came down faster than diver bombers.

I simply had no explanation for it, none at all, and that made me extremely uncomfortable. As an engineering major it bugged the Hell out of me that I could not figure out what I saw.

When I got home my family was asleep, of course, so there was no one awake to tell, but by then I already decided I would not talk about what happened until I had more time to figure it out.

I thought about it often over the next several days, entertaining all sorts of wild possibilities, and eliminating each. For example:

Perhaps they were military aircraft, something new and capable of tremendous agility. But I ruled that out because no matter what they were, they had to obey the laws of physics and anything moving as fast as they initially descended would have made heavy duty sonic booms, easily audible even at 70 miles an hour.

I continued this process of examination and elimination, theory after theory, with nothing very satisfying, until I was left with only 2 bizarre possibilities…

Either I had seen some kind of breathtaking alien engineering flying around up there, or there was actually nothing in the sky that night, and in a way entirely outside my experience, I had hallucinated it.

A philosophical principal called Occam’s Razor can often help with a dilemma like that. Essentially it says that when you’re faced with competing hypotheses, the simplest solution, the one with the fewest assumptions, is most likely to be correct.

I had to decide which was simpler. Did I see alien spacecraft from another planet visiting Earth to make dive bombing runs on mountains in the Poconos with their running lights still on because they wanted to freak out me and 250 cows, or did my mind inexplicably manage to fabricate the entire thing, stone cold sober but perhaps a little tired.

I had no choice, the only reasonable explanation was that no matter how real it seemed at the time, it was some kind of visual hallucination.

Here we are 44+ years later and I still have absolutely no better explanation for it, even after all this time nothing reasonable has ever surfaced. It’s as mysterious to me today as it was back then.