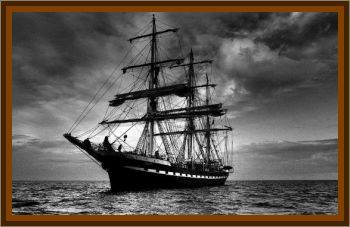 On the evening of the 4th of November, 1872, Captain Briggs and his wife, Sarah, have dinner with Captain David Reed Morehouse, and Mrs. Morehouse. The two captains have been friends for years, and coincidentally, are both sailing across the Atlantic to Europe, but on different ships, a few days apart.

On November 7, 1872, the American 282-ton brigantine Mary Celeste set sail from New York Harbor on its way to Genoa, Italy. On board were the ship's captain, Benjamin Spooner Briggs, his wife, Sarah, and their 2-year-old daughter, Sophia, along with 7 crewmembers. Less than a month later, on December 5, a passing British ship called Dei Gratia spotted Mary Celeste at full sail and adrift about 400 miles east of the Azores, with no sign of the captain, his family, or any of the crew. He was puzzled to see the ship yawing, coming into the wind and then falling off, she was out of control. He knew Captain Briggs to be a good seaman. Aside from 3½ feet of water in the hold and a missing lifeboat, the ship was undamaged and loaded with six months worth of food and water. The clock was not functioning, the compass was destroyed, and the sextant and marine chronometer were missing. The ship's papers were missing, but the captain's logbook was unmolested. The forehatch was open, but the main hatch sealed.

Mary Celeste had a shadowy past. Originally christened Amazon, it was given a new name after a series of mishaps (including the sudden illness and death of its first captain and a collision with another ship in the English Channel). The Dei Gratia became famous in 1872 when, under the command of David Reed Morehouse, she discovered the mystery ship Mary Celeste found sailing abandoned without any crew near the Azores. Morehouse and his crew took the derelict Mary Celeste to Gibraltar and claimed the brigantine as salvage. An investigation into whether to grant payment by its insurers to the Dei Gratia's crew for salvaging the “ghost ship” found no evidence of foul play.

Meanwhile, one of the most famous maritime mysteries in history endures: Why would an experienced captain such as Briggs, or his sailors, abandon a perfectly sound ship? Theories over the years have ranged from mutiny and pirate attack to assault by giant octopus or sea monster, while the more scientifically minded proposed an explosion caused by fumes from the 1,700 barrels of crude alcohol in the ship's hold. An investigation chronicled in the 2007 documentary The True Story of the Mary Celeste was able to offer no definite conclusion, but did suggest a scenario in which a faulty chronometer, rough seas and a clogged onboard pump could have led Briggs to order the ship abandoned shortly after sighting land on November 25, 1872. According to the last entry in the ship's log book, made that morning, Mary Celeste was within sight of the Azores island of Santa Maria, some 500 miles from where the Dei Gratia would find it nine days later.

Mary Celeste would sail under different owners for 12 years before its last captain deliberately ran it aground in Haiti as part of an attempted insurance fraud, in 1885.