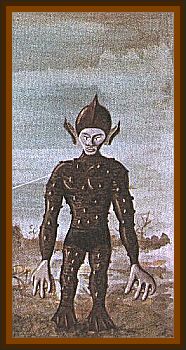 A traveler passing down a country road in the state of Western Australia came upon a man working on a strange silvery machine.

When the traveler stopped to offer his assistance, The stranger turned as if surprised and pointed something at the man, that knocked him unconscious.

When he returned to consciousness, the stranger and the strange silvery machine were gone. Subsequently, he found that his memory was never the same again.