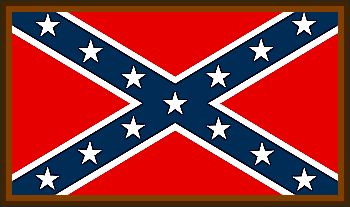 Prior to airplanes, a white object was observed about half a mile high and moving rapidly toward the south.

A Confederate soldier's war journal was published as Blood & Sacrifice, in 1994.

Prior to our arrival at Cave Springs, quite early in the forenoon in fact, a white object was observed in the sky to the southeast, apparently about half a mile high and moving rapidly toward the south.

We decided that it was a balloon, and that the enemy was endeavoring by that means to ascertain the strength of the reinforcements that were coming to Gen. Johnston.

The book editor notes that Union General Sherman's troops did not have balloons with them on the Atlanta Campaign. It should also be noted that observation balloons were tied to the ground and only moved vertically up and down.

If a balloon were untethered by accident, it would only move as fast as any winds prevailing at the time, or certainly not rapidly.

The book author, was a Sergeant in Company B, 46th Mississippi Infantry Regiment, and later Sergeant Major, and finally Acting Adjutant of the Regiment. He had been a school teacher prior to the War Between The States, and the book is a very factual chronology of his daily experiences during the War.