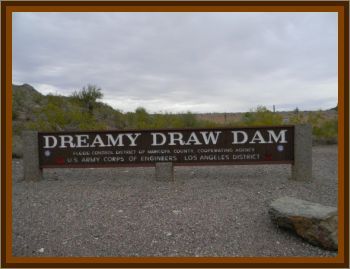 22 year old Selman Graves and his 16 year old brother-in-law Bob Malody were rabbit hunting and exploring mines in the Cave Creek Recreational Area north of Phoenix. They climbed to the top of the most prominent hill in the area and looked west. They witnessed an incredible scene.

He saw a large silver metallic dome shaped thing sitting upright in the desert. He thought it might be some kind of observatory dome, except why should a dome be down at that elevation? He saw 5 men and 2 trucks near the dome. No uniforms, and no one was working. Graves estimated the dome was 36' in diameter and maybe a mile away.

It wasn’t until 1952, when he read a book about UFOs that he considered that he saw the crash site of a UFO. The book was about the Cave Creek incident and mentioned the existence of 2 humanoid bodies that were retrieved from the craft.

There has been speculation that the Phoenix area had 2 crashes, both are related In that same time. It is believed that the UFO first touched down in the Dreamy Draw area, then hopped over to the Cave Creek area before crashing.

Several years ago, a grizzled miner,only known as Pete, who worked at the famous Mistress Mine near Seven Springs. came forward with the following:

You're not going to believe this, but a friend of mine watched some government agents back in the late 1940's, recover and truck away wreckage of what looked like a flying saucer. He added that it was referenced in a book called Above Top Secret. Sure enough, on page 394, there it was, a description of a UFO crash just south of the present day Carefree Highway.

As the story goes, the Cave Creek landfill was placed there to cover the site. The landfill is closed now. Debris along with dirt were trucked down to be placed in the Dreamy Draw Dam along Northern Avenue, a dam that many experts say was never necessary, and finally, Cave Creek Road was bent, or aligned further to the east.