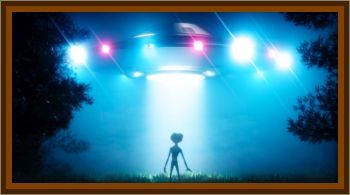 The inside of the ship, its framework, was cylindrical in shape, made out of numerous tube like structures. The door was positioned in the center of the cylinder. The men seemed to freeze in place every time he looked at them. The beings were dressed in tight-fitting overalls, which clearly outlined their musculature. Under their helmets they had yellowish caps. Their hair was short, bristling, sticking straight up.

All of the humanoids looked young, no more than 30 years of age. Their faces were clean shaven without wrinkles. They never spoke a word with Peter. And amazingly the local chief of the diesel electric power plant apparently communicated with the aliens, they requested a favor from him, and he went to a local food store and purchased several foodstuffs for the aliens. Bykavorov watched all this in amazement from a distance. Apparently at first the aliens had tried to visit the store, but after creating a stir in the store they had to leave. So after that failed attempt they asked the chief to do it for them instead.

Unfortunately due to the distance, additional details were not established. The humanoids generally stayed away from everybody, and remained close to their landed craft. When some of the locals attempted to approach the object the entities boarded their craft and flew towards the nearby mountains.

According to Peter, the craft flew very fast. However they returned in the evening as it got dark. At that time the aliens switched on a light, very bright similar to an ox-eye, about 16' long, of yellow & red in color. Near the craft the aliens constructed a bonfire that seemed to burn very hot and was same shape as the bottom of their craft, the whole afternoon the aliens had been very busily occupied by some work.

Bykavorov who kept a close eye on their activities felt fear but eventually was able to establish telepathic communication with the alien crew. At times he would receive orders from the aliens to come close but he could not remember most of the details. Bykavorov was summoned on several occasions by the aliens outside during the night.

The second time he watched a large metallic cone shaped craft that remained on the ground for two days. The next day he saw a huge burst of flame but no smoke, rise from the ground. He did not see the aliens again after that. Incredibly it is reported that several unknown items were left behind by the aliens and these were picked up by the operators of a local hostel. Bykavorov only spoke about the incident 30 years later. It must be remembered that during Stalin's times it was prohibited to speak about UFOs in the USSR, and only spoke about the incident in the late 90's.