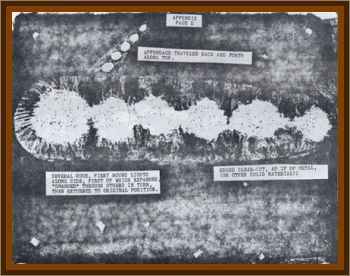 While the majority of UFOs are seen either flying in the sky or landed on the ground, a small portion of accounts involve ocean going UFOs. Sometimes, these craft are seen to actually enter or emerge from the ocean itself. Underwater UFOs are relatively rare, except for one location, a small stretch of coastline off southern California, known as the Santa Catalina Channel. North from Santa Barbara down south to Long Beach, the waters seem to be thick with UFOs. In fact, this section of coastline has produced dozens of cases. The sightings reach back to the 1940s and continue to the present day.

The first reported California underwater UFO was on July 7, 1947 when two San Raphael teenagers saw a flat glistening object emerge from the water, fly around and then dive back into the water 400 yards from shore.

On July 8, 1947, the very same day that RoswellRoswell’s Daily Record was reporting the initial flying disk story, a remarkable incident reportedly occurred in the skies above Avalon, CA.

An article on the front page of the week’s issue of the Catalina Islander details an alleged sighting by three visiting Army veterans of six flying disks traveling at high speed from the northeast and passing directly over Avalon before disappearing over East Peak.

According to the story, the six disks appeared at about 1:00 p.m. and flew in a formation of two sets of three and were witnessed not only by the veterans, but by hundreds of others as well.

Alvio Russo, one of the reported witnesses and an Army Air Corps veteran who had flown 35 bombing missions over Germany with the Eighth Air Force, estimated the velocity of the disks at 850 miles an hour, according to the story. Bob Jung, listed as a former aerial photographer agreed with this estimate and said they were flying roughly as fast as the U.S. Navy’s Tiny Tim rocket, which he had photographed numerous times for the Navy.

In 1953, Engineer Frederick Hehr and several others are on Santa Monica beach when they observe a squadron of saucers performing maneuvers in the daylight sky over the bay. Later that day, the objects return and perform more maneuvers for a period of about ten minutes.

On July 10, 1955 , At around 11:00 a.m., several fishermen off the coast of Newport Beach observe a bluish silver, cigar shaped object flying overhead at a moderate speed and medium altitude. Two and a half hours later, a Washington family of three are sailing 13 miles off the coast of Newport Beach on their way to Catalina Island when they observe a perfectly round, gray white craft about 2,500' above their boat. When the object maintains its position over their boat, they radio the Coast Guard, which sends out a plane. The object darts away before the plane arrives.

Then on November 6, 1957, in Playa Del Rey, three cars driving along the Pacific Coast Highway suddenly stall when a large egg shaped object surrounded in a blue haze lands on the beach only a few yards away. Witnesses Richard Kehoe, Ronald Burke, and Joe Thomas exit their cars and observe two strange looking men disembarking from the object. The UFO occupants have yellowish green skin and wear black leather pants, white belts and light colored jerseys. They walk up to the witnesses and begin asking questions. Kehoe and the others are unable to understand the occupants, who are apparently speaking a foreign language. After a few moments, the figures return to the object, which takes off and accelerates out of sight.

During December 1957, the crew of the British steamship Ramsey observes a large metallic gray disk with antenna like projections off the coast of San Pedro. One of the crewmen grabs his camera and captures a blurry photo of the object before it moves away.

In 1960, actor Chad Everett and two friends are on the rooftop of his Beverly Hills home one night when they observe a lighted object moving back and forth at high speeds over the nearby ocean. Because the object moves so quickly and at right angles, the witnesses are convinced it is a genuine UFO.

In 1966, onn assignment to photograph Catalina Island for the US Navy, Mr. Leland Hanson, was in a helicopter when he filmed an object, which at first hovered, then sped across the length of the island. According to independent photographic experts, the disk's calculated velocity was between 130 to 170 mph, and had no apparent wings or tail that would signify it as an airplane. However, researchers at NASA's Jet Propulsion Laboratory computer enhanced the image and found that there might have been a tail rudder.

On January 22, 1968, an object was sighted that had an appearance and performance beyond the capability of known earthly aircraft. One object was observed by one experienced male witness on the ocean for 45 minutes.

In 1970, as investigated by Bill Hamilton, an anonymous gentleman sailing from Catalina Island to San Pedro Harbor observes a metallic saucer with four hemispherical pods underneath it flying only a few hundred feet above his boat.

On May 1973, an art director observes an object sending down a beam of light while driving along the Pacific Coast Highway in Santa Monica in the pre dawn hours. The UFO was over where the beach was, hovering I would say maybe a hundred, two hundred feet in the air. It was silver. It was your basic UFO, it was definitely completely metallic with a silver dome on top and a silver dome on the bottom of it, like two plates put together. And it had little lights around it.

On January 26, 1980 Roman Noah Felice flying his small plane, a Piper PA-32, off Catalina Island spotted an object just below the surface of the water which enveloped his plane with a bright light, freezing his controls. His next recollection was waking in the hospital with NTSB and LA County Sheriff personnel. His cousin, Mark Anthony Felice was killed in the crash.

In the summer of 1988, Professional photographer Kim Carlsberg observes a darting, star like object while relaxing in her Malibu beachfront home. Suddenly, the object moves directly toward her. The brilliant point of light advanced until it became a luminous sphere some 50' in diameter, reports Carlsberg. It ominously hung in the air 100' from my window, the apparent standoff lasted no more than a minute before the sphere departed as quickly as it appeared. It tore away diagonally through the night sky and vanished.

In May 4, 1990, early in the morning, two Malibu surfers are lying on their surfboards waiting for the next wave when they observe a, brushed aluminum saucer with a bump in the middle which approached the shoreline from out of the fog bank sitting about a mile offshore. The object darts back and forth then moves back out to sea.

During the summer of 1990 private pilot Toshi Inouye and his student observe a large, red, glowing cigar shaped object hovering near their plane as they fly over the Santa Monica Bay in late afternoon. It was standing still in the air, glowing red, says Inouye. We were kind of stunned. We didn’t know what to do. Inouye considers calling the nearby airport control tower when the object suddenly darts away.

Adam and Mario are driving along the Pacific Coast Highway in Malibu in 1998 when they see six black, diamond shaped objects darting at high speed up and down the coast. The two men are so impressed by the brief sighting that they spend the next hour driving up and down the coast hoping for a repeat appearance. While they don’t see any more UFOs, they do find other UFO watchers.

Says Adam: We did come across a couple of people who were just sitting in their lawn chairs along the road. I don’t know if this has anything to do with it, but they were just sitting there along the side of the road, just looking up. Lastly, on January 3, 2004, Young Chyren is standing along the Santa Monica coast at midday when he observes a metallic, saucer shaped craft hovering only a few thousand feet directly above a small yacht less than a mile out at sea. He quickly grabs his camera and snaps a photograph.